There are many things that the French are patriotic or even chauvinistic about. Baguettes, cigarettes, cheese, wine, cinema, fashion, the speedy TGV and…….French House/Electro/Euro Disco/ Neu Disco. Whatever you want to call it. And you can play me all the dub step you like, in my opinion the French do it better (with a huge exception going to Bloc Party). The most famous example is Daft Punk. And in second place is the hugely successful Justice.

They are famous for their intense electro tunes mixed with both indie and rock touches. And that for me is just about the perfect recipe for something I want to jam to. And so we the launch of their amazing new Audio, Video, Disco album (people this one is a grower- give it more than one listen) and their new tour dates – off I went to old Paris. Because seeing a band in its home country is always just a fuller experience and this definitely holds true for the French. 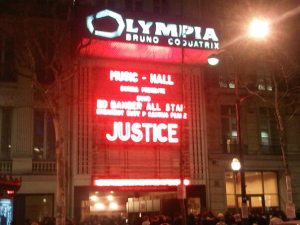 So the venue: L’Olympia. What a great concert hall. Well rather strange for a mainly electro party to be honest. We had the marsh pit for us to jam but there were also numerous seated tickets (to be fair no one sat for a second but partied standing in their seats – including a hugely fat man wearing a red wife-beater and power ranger mask who put on a hyperactive show before the set started and got loud cheering from the crowd).

One word of advice though. If you go in winter – go EARLY. The vestiaire is not big enough for a sold out show. And this is not a train smash if you going to go watch theatre there. But jamming with your four layers on can be somewhat prohibiting. If indeed you reach this tragic state I recommend bribing either the merchandising selling people, some small kid in the front of the row, the bartenders or in last resort throwing your jacket on top of any high hanging poles. But in no way should such a jam session like this be disturbed with.

So the show started with two opening DJs. We used this time to warm up with some beers and ease our legs – which were in for a workout. And then a 30 minutes entr’acte. And then the lights went dark and the crowd held their breath. As Gaspard and Xavier appear behind a musical thrown we all are mesmerized. The thrown was made up of one large black rectangular box and on each side a tower of 3×3 Marshall big ass speakers. As the tunes start a dramatic pause and then the middle black box is enlighten with the famous and iconic white bright +. 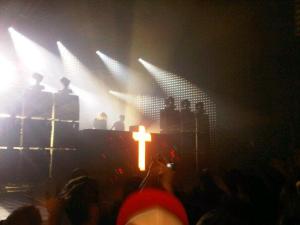 And now the crowd really goes wild.
And with a stage like that they were right to state:
No need to know ask my name, to figure out how cool I am

I would like to tell you the order of some of the songs they played, at least for the memorable parts. But I would be just making it up. I even checked the brilliant setlist.com and nothing since two entries in 2008 are to be found. And there are perfectly good reasons for that.

They remix EVERYTHING all the time. Not in an annoying average club dj-plays-a-shitty-song-for-30-second-then-skip kind of way. But an amazing of old and new album all beautifully joint and merged and flowed into each other. These people know how to do leveling and build up. At all times there were minimum two songs playing on top of each other. Sometimes three or four. 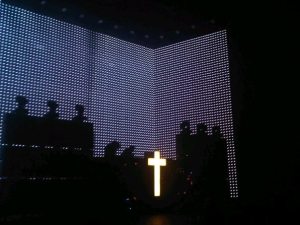 The music was hugely amplified by the lighting. At first just the cross in bright light. But then the curtains of bulb all around them also lit up. Then huge light rays from behind the curtains. Then later the Marshall speakers lit up all in different order. It all turned red for a song. And all starry and dark for another. Whatever they did with the lighting was just powerful. 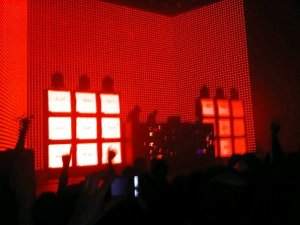 The highlight for me was on two occasions the middle box split at the Cross and moved on either side to reveal a keyboard. And this point Gaspard temporarily left his throne to play along to the song. God does the man have great curly hair. Then the stage closes back up and he climbs back up. Xavier does the same towards the end. Making up for the afro with his chic way of smoking a cigarette. 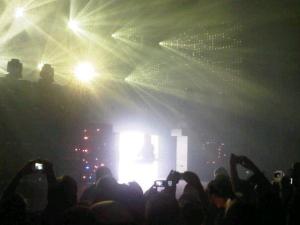 The atmosphere in the pit was great. The ground was literally trembling from all the jumping. I just came here to bounce. And there was some fun pushing and pulling typical marshing but nothing to make you fear for your life. There was a great solidarity that was passing through us as well all jumped, jammed and screamed together. The crowd were real rockers.

As the stage went dark for the first time the entire hall screamed JUSTICE (in a surprisingly English pronunciation) and the duo came back on. At this point all hell breaks loose. They threw everything at us one on top of the other including massive use of the classic We are Your Friends.

And as they end their amazing encore we all finally stand still and cheer and clap loudly. They climb on top of speakers and do victory fist in the air. They had won. They had succeeded. They had experience something magical. But the great thing about music is – so had we.