BIG THANK YOU TO FELLOW CONCERT ROCKER TOMMY FOR THE PHOTOS AND VIDEOS. 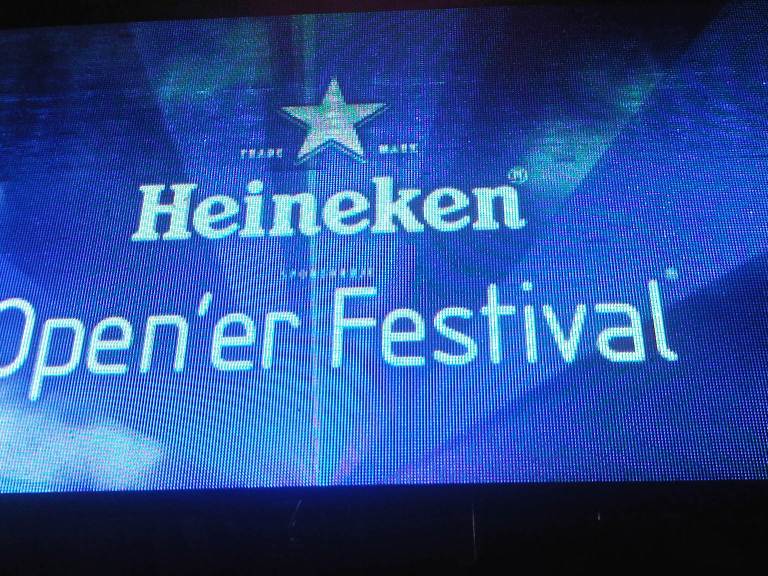 Or however you may say it. This is the one word artist repeatedly try to pronounce to thank Poland and Open’ er for the wonderful experience. And I can’t help but repeat the same.

Just back from the four days Heineken Sponsored Opener, life does not feel the same. Where is the mud? Where is the noise? Where are the long distances to run? The sausage and long bread (zapiekanka)? The smell of the ToiTois and sweat? The masses of people everywhere? And most importantly where is my beer? 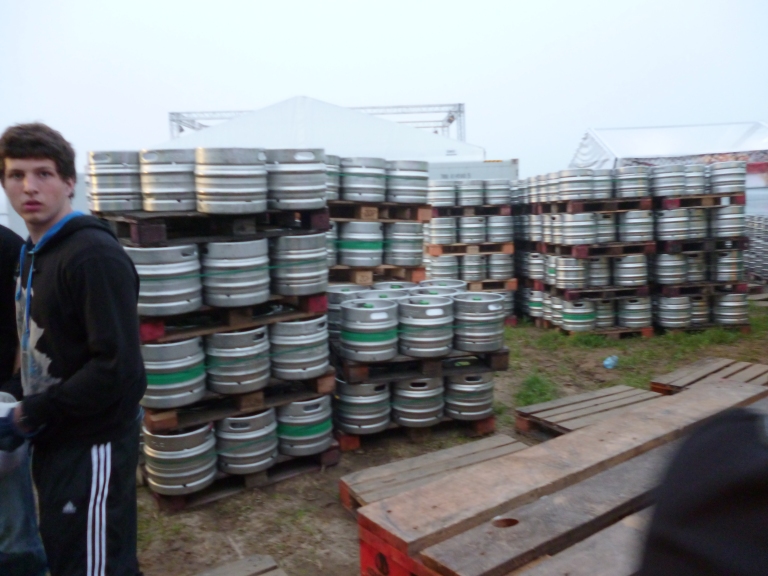 A four day festival really draws you into a different world. All needs and desires get reduced to basic necessity: eat, drink (beer), toilet (hold your breath), and sleep (scarce). The rest of your energy needs to be focused on one thing: THE MUSIC – and getting as close to possible to it. Especially if the line-up looks like this.

For only 90 euros, this year Opener not only had one of the top line ups but was also the best value for your buck. Hands down. As the programme only started around 6ish every evening (lasting till 2ish in the morning) you had time to enjoy the Polish beaches during the day (which were much better than expected) as well as embrace the Polish culture. 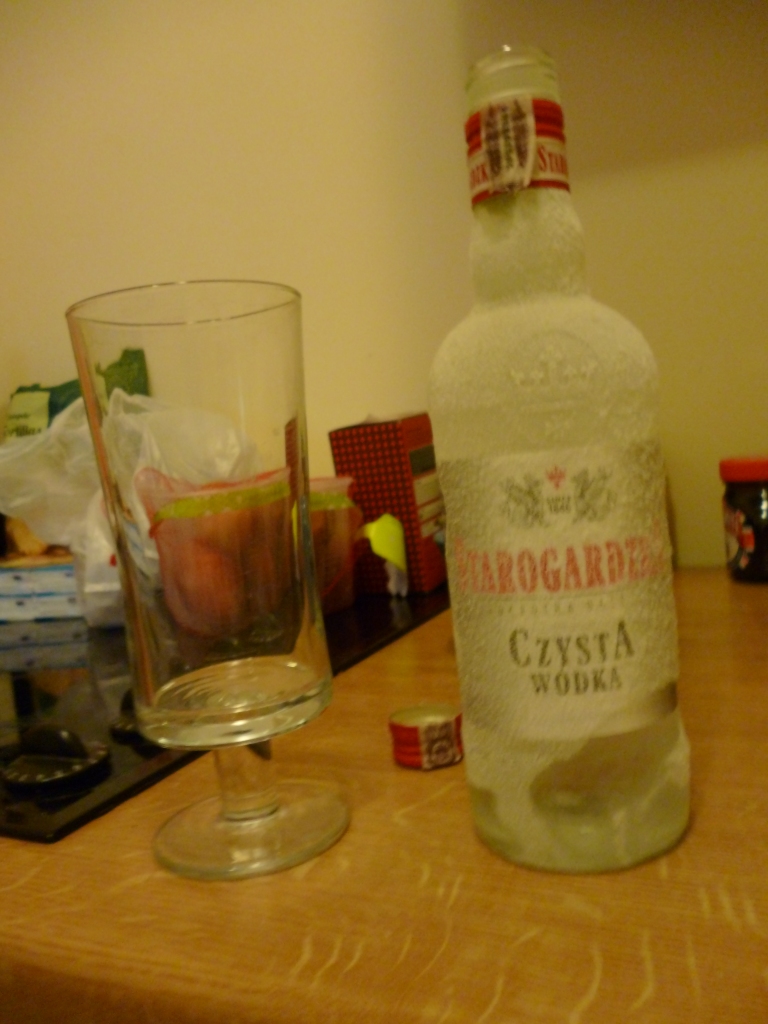 Overall I was very impressed with the festival. It had about 85 000 concert goers and two main stages with three or four smaller ones. In my opinion, this is the perfect size of a festival. Anything with more than 2-3 main stages you waste so much time running around and choosing between acts its more frustrating than fun. And the bigger the line-up looks the less likely you are to see any of it properly. Even now we ran plenty and didn’t get to see everything we wanted and praised the one hour brakes we did get. 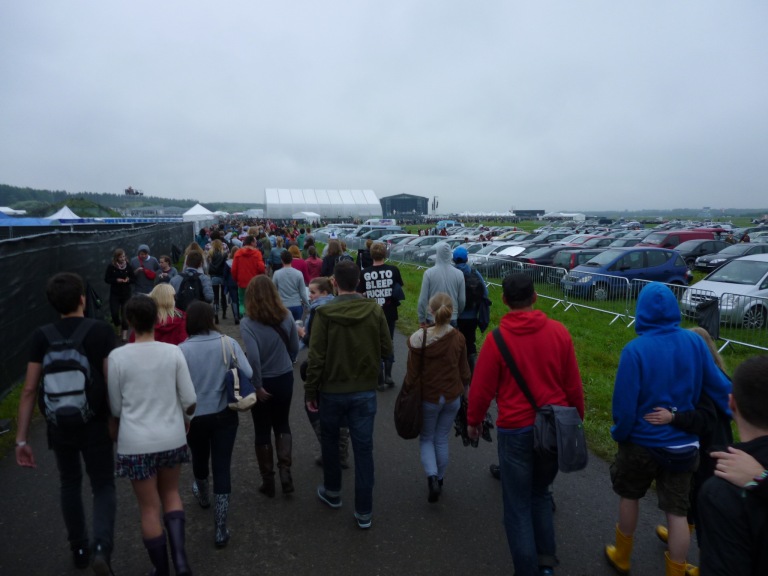 Everything was very well organized – especially the transport to and back from site (we stayed in a small town nearby) – with busses coming literally every 10 seconds at all times of the day and night. The food and drink stalls were numerous with queues being tolerable. The food stalls were mostly Polish ‘specialities’ although there were also Greek, Indian, Thai stalls etc. The toilets were – well toilets at a festival.  I think there are no miraculous cures here yet. Scientists are still prioritizing the HIV cure before we get onto this repulsive entity. Apparently the camping wasn’t too well organized though – with queues for showers lasting up to 3 hours and being far apart (good decision not to camp after all).

The polish festival crowd is exactly what you would want as a music fanatic. Highly enthusiastic, friendly and responsive crowd yet not aggressive. And luckily so – as I was surprised with just how little international people there were. I hardly heard any other languages than Polish and got a couple of looks when I spoke English. Although on the weekend I heard some good old Brits here and there. I guess Poland is still seen as unfamiliar by the majority – and summer festivals in sunnier destinations like Spain or Portugal still woe the holiday goers. 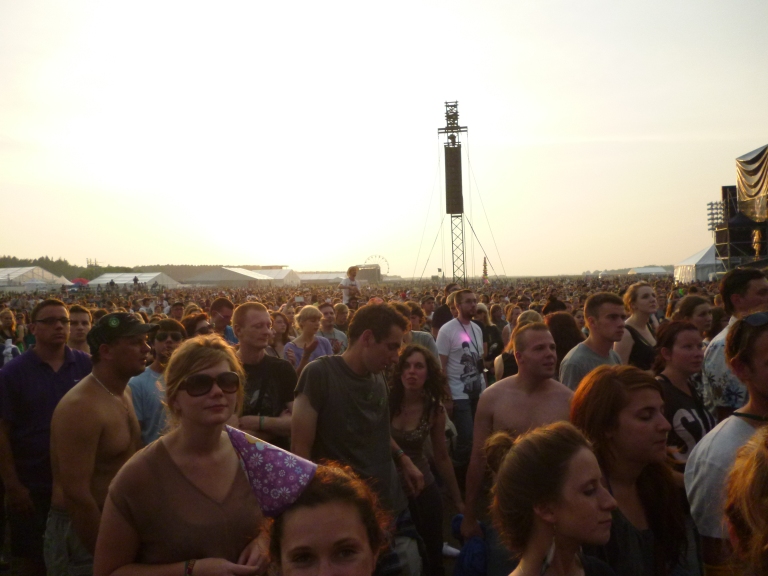 And we got lucky on the weather. I nearly cried when the forecast for the four days was rain, rain, rain and rain. But apart from a small deluge of 45 minutes on the very last day we didn’t get a drop during the festival time. However it rained every early morning which ensured we got a fair bit of mud to handle during the day.  If ever you are in doubt – Wellies are the only way forward in festival. Always. 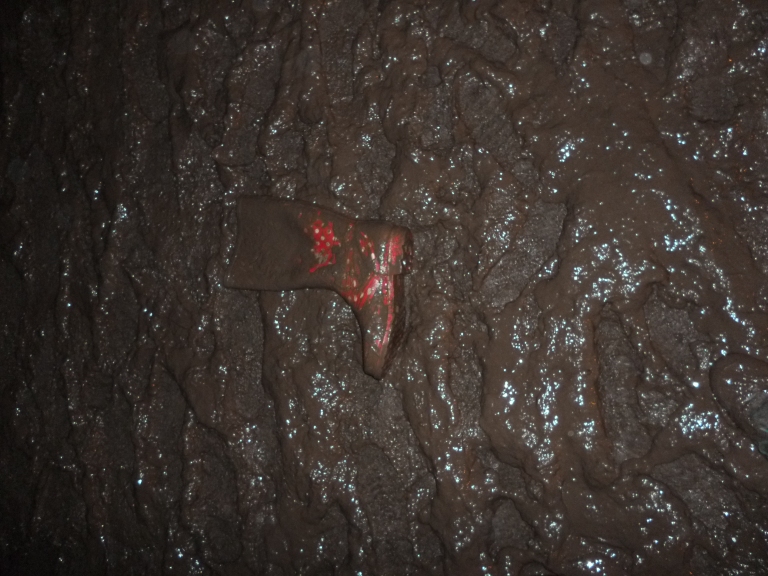 The festival opened with none other than The Kills. What a bang to start with. But almost a pity as I would have wanted the music stretch to start with something a little lighter so I could have been looser for this incredible band. I saw The Kills back in November last year – following a month where I listened to them and only them for about 6 hours every day. After an amazing performance it was clear to me that the duo was nothing short of SEX ON STAGE. And their performance at the festival was at an even higher level. This band is ROCK N ROLL on steroids. They have the presence of gods and the moves to match. No one looks hotter than Alison and her dance moves as she bangs her head and her messy blonde and pink hair goes flying all over the place. Tight skinny pants on her long legs, lace up boots and a jacket with minimal top and rocking accessories is her repeated look – and she owns it. The energy bounces of VV as she grinds around the stage and the entire crowd can do nothing to do but stare. 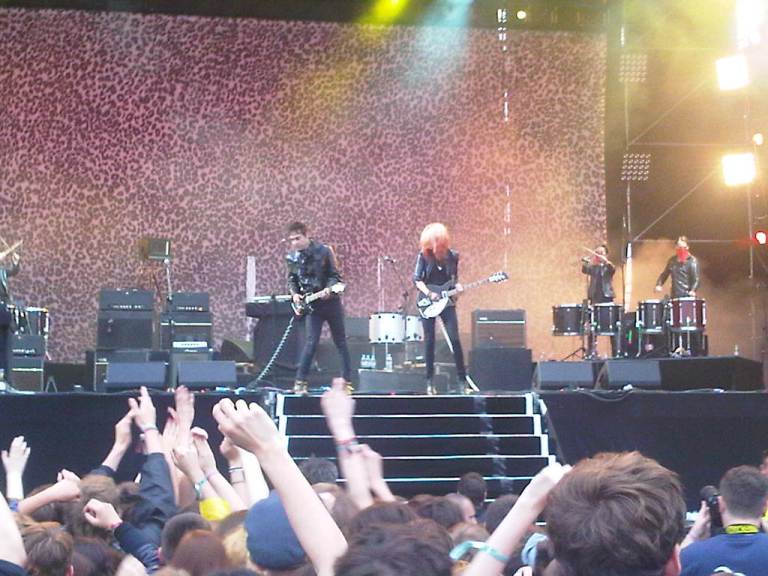 As for Jamie, he strings his guitar as confident as can be (he is married to Kate Moss after all) and with his few but effective moves he is the hard-core rock pillar allowing VV to rock around his Hotel. When they sing facing each other and let their voices intermingle so perfectly you cannot feel but strength in both of them. And that they must have had sex numerous of times. Even if surprisingly they are not together. That intimacy cannot come without it. There are several rumours that they were dating before but it’s hard to figure out which bits are true or not. 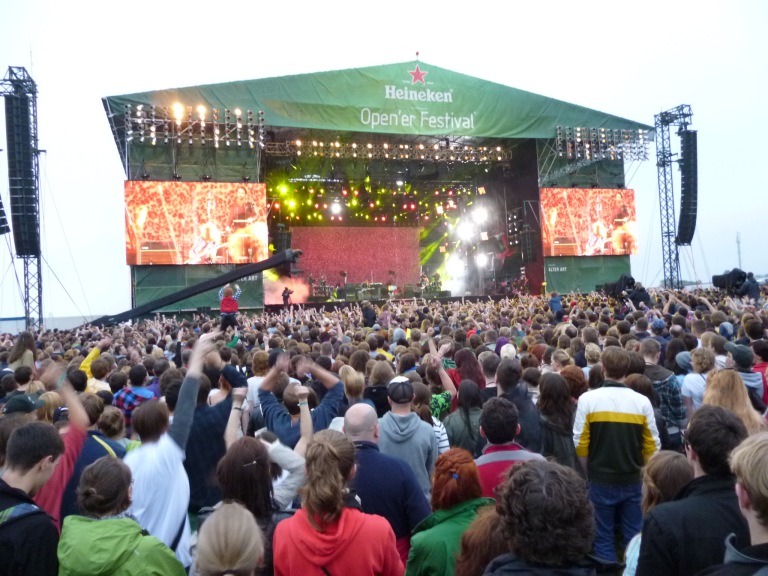 And all that energy and boom and that was that. The first act of the festival was done. And off we were. Running to get a beer – then having to down it in 10 seconds when we realized you could not take it out of the designated food areas until 11pm (with the occasional sneak) and running to the other side of the festival to catch Yeasayer.

If there is one thing that I think Opener could improve on – it’s reducing the distance between the Main stage and the Tent stage on the other side of the old Airfield grounds. This is FAR – and since most of the major acts were back to back on either sides of the field with at least a 15 minutes overlap – it meant that you missed a good 30 minutes of some acts (and were pretty breathless when you arrived).

Anyways run we did and it was well worth it. Yeasayer were jamming! The tent is wonderful for electro style music as the atmosphere created by the closed environment can really be amplified by good lighting. Yeasayer sounded nothing short of amazing live and we danced hard to the sound – which I must say was of a much higher quality than where I first saw them in Barcelona two years ago. 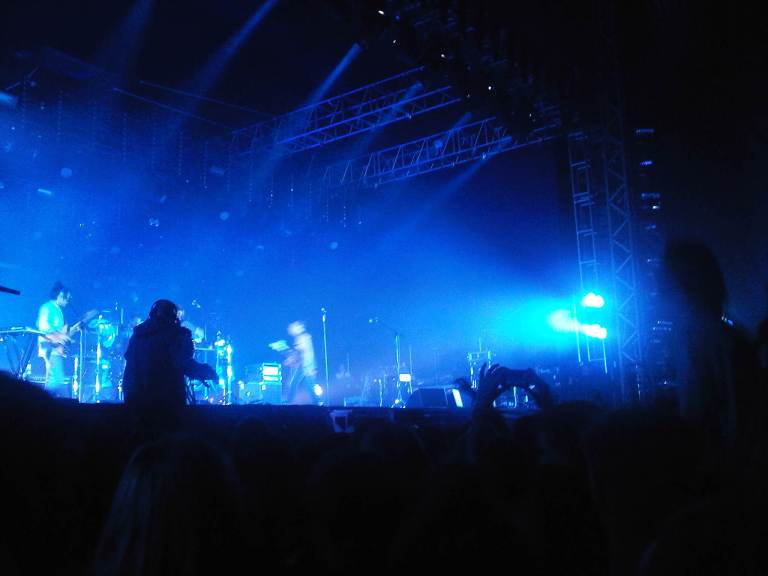 Then next up was the headliner (which surprisingly was) Bjork. There is no doubt the lioness haired Bjork is nothing short of striking. Her performance was highly intensified by the large female choir behind her. All dressed in pagan looking clothing you felt that the performance was done by mystical creatures praising the elements. And with the DNA style videos it all kind of fit. Not my style of music but still a great show. 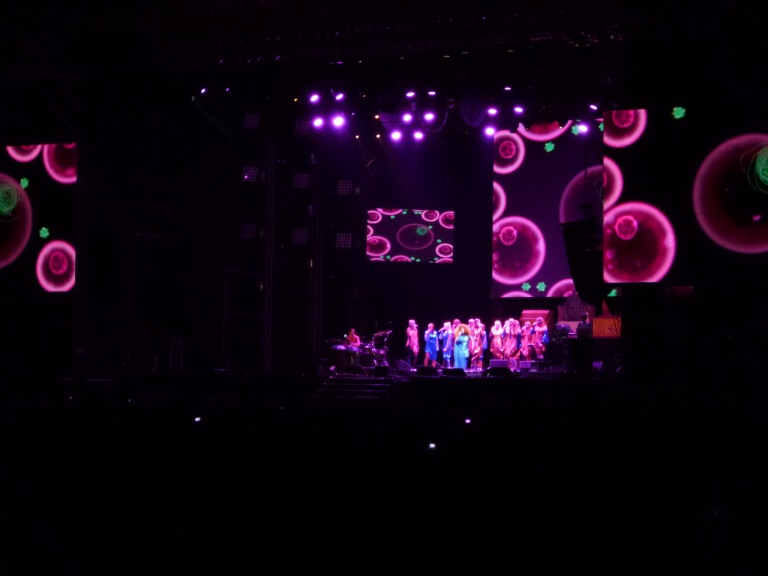 The final act of the night, what a privilege, was the old school legends New Order. 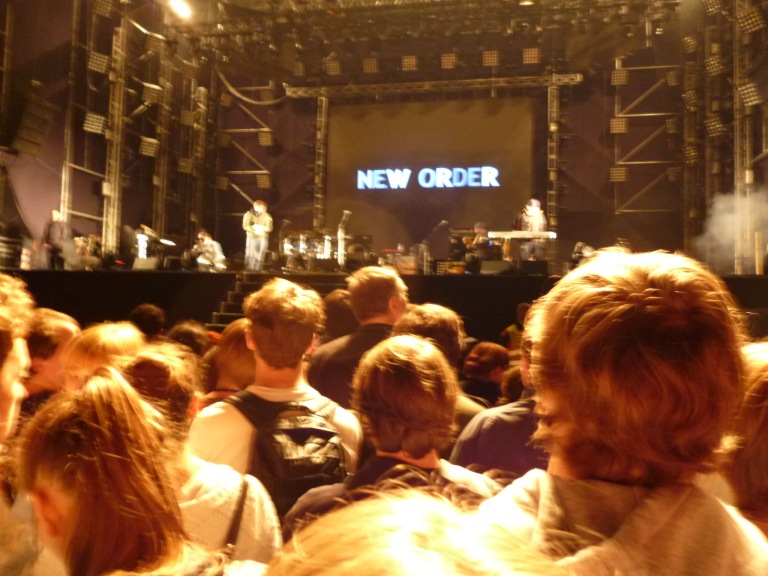 It’s no secret to anyone that I am very much a new age fan and my knowledge for the oldies is limited. But the reformation of what was Joy Division after the suicide of Ian Curtis caught more than my respect. It was just incredible to see them perform with all the energy they must have had at their peak. These legends who made huge leaps in both new wave and electro music gave us their all. This is what I call a build up. Have a look.

They also performed some Joy Division songs and it’s quite something to say I got to see Love Will Tear Us Apart Again live.

All of this in a day. WOAH. We trekked back with happy faces, both for what had just hit us and for what was to come.