On to day 3. Here you start thinking that beer is your normal diet and can hardly get water down (jokes aside).

What a packed day. We warmed up with a quick run to catch Toro Y Moi at the Tent Stage (slightly disappointed) and then ran back to Bloc Party.

AND IS BLOC PARTY BACK. I caught this iconic band about 3 years ago just before they took their break (read Kele selfishly tried to go solo and had a bit of a flop). That day in Greece, after popping 3 pain killers as my wisdom’s decided to create mountains in my mouth, and braving the concert alone they won a place in my heart. And it’s good that that place was warmed up again after a long silence.

They are back and better than ever.  And the foursome has not changed. There’s of course Kele –

– who by far has the most powerful voice of the festival and just like Bon Iver – has a range of a demon. High, low and everywhere in between but all with the strength and confidence of a move trailer voice over. He has such a big mouth big lips and his vocal chords just resonate with might as he beautiful blurts out the sounds. And an incredible iconic and unique tone of voice.

There is Matt Tong the drummer. Who hit his drums so hard in the sun that he took off his shirt after a serious sweat session. He created just as much sweat on all of us as we jumped to his beats. Hands down the best drummer of the concert. INCREDIBLE skills. And then the two guitarist. Who were obviously born to create music. Who skills are beyond question. But who look as bored as if they were playing at an old age home. No emotion, no movements And you know what that’s fine. Kele and Matt have enough energy for 10 people.

They played songs from all their albums. I was also happy to hear a couple of new singles off their much awaited new album – and the good news is that even after one performance they sound freaking awesome. So can’t wait for that to come out (or the torrent to be leaked). They still didn’t play Kreuzberg (my fav) but I will just need to keep going to watch them till they do.

And then what may have been THE performance of the festival Franz Ferdinand. This was a SHOW. Franz Ferdinand, which my friend Sarah rightfully said looks like a child molester with a bad haircut, has (surprisingly) the confidence of a King. And even with his unattractive face being sprawled in the back drop behind him you can’t do anything else than respect him cause he pulls it off. The band just rocked. The energy was as high as the Heineken Star at the top of the stage and we all jammed away. FF’s songs are just made for a festival. The songs are powerful, original yet easy to listen and sing to and can’t help but get you on your feet. This music was made for jumping. And jump we did.

The lighting was also excellent – with beams resembling power lasers lighting up the sky and blaring from the stage. But the highlight of the performance was in no doubt the 4 minutes 4 way drumming mania. All four members of the stage attacked the drum kit for a full fledge mania. This was just an amazing build up and the entire stage went wild. 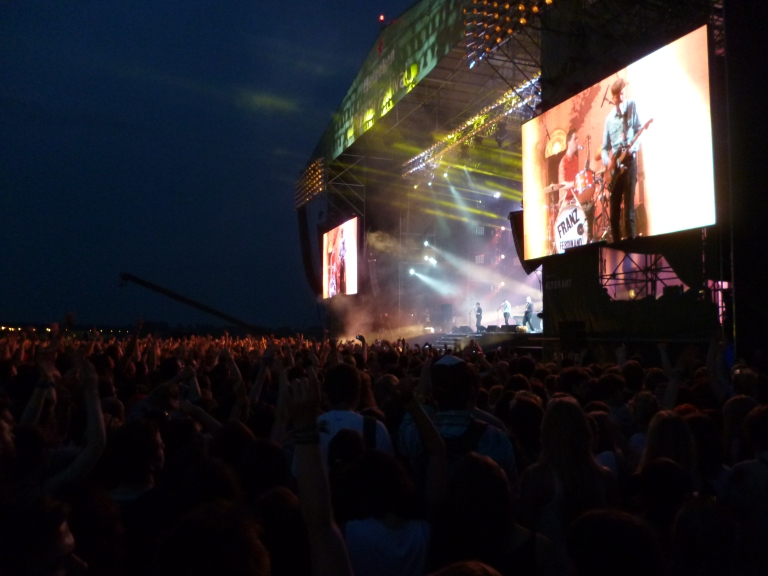 In fact the right high for us to then run back to the other side of the world to catch some M83.

You may remember I saw M83 earlier this year in Lausanne. So you can read more there. But unlike Justice (and most bands) who came down a notch when they performed at a festival, M83 came up about 1000 notches. One of the reasons was probably that the entire crowd was going CRAZY and sending them so much love. The response from the crowd was incredible and they could not do anything but raise their energy to match.

And as they played Midnight city and the tent material nearly shook from the screams and jumps of the overflowing tent there is no doubt that is a performance they will remember. As they lifted their arms to create a heart shape with their hands the entire crowd copied it and it was clear that a French-Polish strong love bond was made. Check it out below to see it for yourself.