So Day 4 all started with me trying out a Polish punk band Cool Kids of Death. Talk about embracing the culture. Rap in polish is a lil difficult to attach yourself too. However they were still fun for a good old jump around in a teenager dominated marsh pit. Unfortunately towards the end of the performance the heavens Opene’ered up and the rain started. What was a few drops quickly turned into a storm with thunder and lighting. Luckily after about 45 minutes of heavy rain it all stopped and the performances manage to continue with a short delay.

Mumford & Sons were up next. And although the opening song was a weak one (I think possibly a new one) they followed it up with their entire top hits one after another and the folk (let’s not say country – I hate country) frolicking was pleasant to say the least. What with the newly formed mud lakes we could all have been jamming in a pig farm.

But I cut that performance short as I had already seen them last year at Primavera and was keen to watch the whole of Bat for Lashes.

And what a good choice that was. Bat for Lashes was the most enchanting performance of the festival. As Natasha Khan came out clothed from head to toe in a heavy patterned long dress and matching headband she looked like a pagan princess. Her stage moves were also very impressive (although completely different to those of Alison) and enchanting. The tent this time transported us to entranced moonlight feel. Her voice is nothing short of perfection – she hit every single of her notes, while rocking back and forward with her arms out like an Egyptian queen. Occasionally shaking some Latino looking shaker. It all felt so natural and intimate that she was giving you a little part of herself without it being much of an effort.

Highlights for me were of course Precilla and Daniel as I am not as familiar with her new album (which of course I will now proceed to get to as the performance was incredible).

And then the grand ending on the main stage: The XX. And it’s really strange what this nothing short of bizarre band could do the crowd. I adore the XX. They were my musical food and fuel and obsession for a good 5 months after their debut album came out. And I can still listen to their album, loving every single song on the album (which is rare) and never getting tired of it.  So impatiently I waited right up close to the stage, surrounded with hard-core (and annoyingly pushy) fans. And as the trio took on the minimal misty stage (they are abusive users of smoke machines) the musical drug started and on it we stayed.

The XX are that weird middle ground. Drawn out sound with a definite beats, but too fast to be slow and too slow to be fast. You are just not quite sure what to do with yourself at their concert. And somehow we were all ok with that. The voices Romy Madley Croft and Oliver Sim are as clear and piercing in real life as it is on the CD. I am still amazed how hard-core and distant the punkie looking singers/guitarist look and how vulnerable and delicate their voices sound. Don’t judge a voice by its cover. And just like The XX the most breath taking moments are the ones when they sing together and let their voices intermingle.

I was again very pleased to hear some new singles off their much awaited second album. And I am delighted to report they also sound fantastic. So only great things ahead. They have a little more bass/slight electro/mixed feel but fantastic and still as originally sounding as the first album. You can see that Jamie Smith (also doing solo mixing work under the name Jamie XX) is adding a great deal of value to Romy and Oliver.

The crowd was obviously giving the band much love as Oliver repeated several time that he was blown away by the Polish crowd, so happy to be here and sorry it took them so long to come. However no matter how much we howled no encore. I guess it’s just too cliché for them.

As the main show finished we walked back to the tent one last time to catch the Africa meets Electro brilliant mix of SBTRKT. It was a really fun act to end the concert on. We gave our tired legs one more jam session. 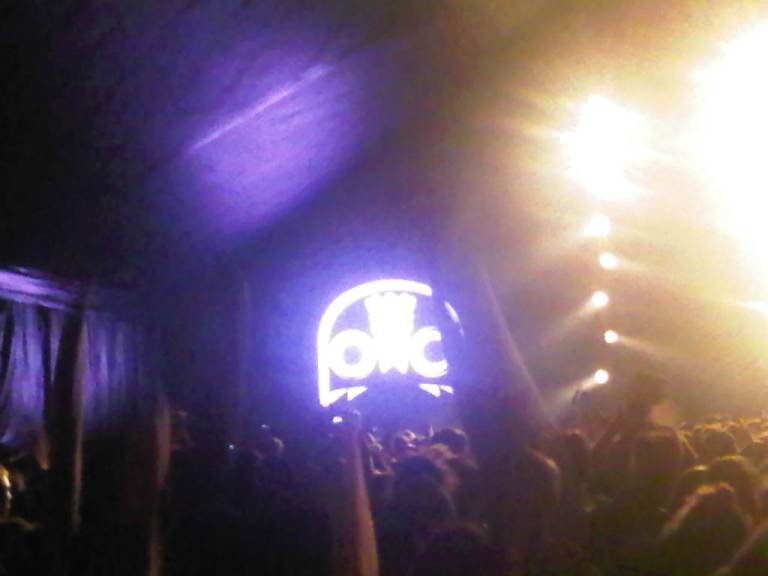 And as we finally retreated to the Heineken Lounge and drank our final drafts of the festival and laughed at some memories that had been cemented in the mud and in our hearts we felt a bit surreal about all that had happened and how it was now over. The festival had drawn us into this new world and was necessarily ready to leave it.

But we weren’t the only ones with a bit of nostalgia. Walking back a crowd was forming around what a must of been very drunk guy (either on music or beer but you can figure out which is more likely) who decided to pitch his tent in the middle of the mud puddle in the camping area and angrily kicked around in the muddy water. Whatever floats your boat man.

Music performances of this level does it for me.