In my mind best summer festival happen in the middle of nowhere, often in a countryside kind of landscape. Best festival memories are mostly linked to UK green hills, clouded-rainy sky and mud. All the background to describe the mix of curiosity, suspicion and excitement I was going through while approaching Rock-en-Seine via underground in Paris. A rock festival in one of the biggest fashion capital of the world might sounds like a strange place to go watch Noel Gallagher and the Black Keys among others. But in life, (at least in mine and my friend’s) we travel for love, and this time (again) we travelled for the love of music, that’s what we were there for, that’s what counted for us, all the rest  it’s just part of the circus.
Let’s go straight to the point: Rock-en-Seine (at his 10th edition this time) it’s a nice place to go see some rock bands, it will never be my best festival ever, stages are rather small, all the festival is pretty tight (the main stage capacity is cut in half at least by a fence on the left), they don’t sell cigarettes (what da f…) but queues for beers are rather short, overall ambience is very relaxed, friendly, girls are as amazing at a rock’n’roll fashion show (that’s the least I would expect from Paris) but most importantly on the Saturday we went, line-up was pretty damn awesome: Maximo Park, The Temper Trap, Deus, Noel Gallagher and The Black Keys, not bad for an afternoon of music with your all life friends.

Now to the music: Maximo Park were good, it’s never easy to kick-off a festival at 5 in the afternoon when sun is still shining, the sound system it’s not really Phil Spector’s wall of sound, your band’s best album came out 7 years ago (A Certain Trigger) and most of the festivaliers are still either coming into the park or getting themselves a fresh beer at the bars. Paul Smith delivered a good show, pushing himself right and left of the stage, jumping here and there trying to animate the crowd, the whole set was rather short (35min). They kicked-it off with “Girls who play guitars” (personally one of my favs) they covered a couple of songs from their recent 4th album (The National Health), dropped here and there  some of the best songs from the debut album (Limassol, Graffiti, Going Missing, I want you to stay and closing with anthem Apply some pressure) and filled the rest with their best singles from the 2 albums (with a great version of Books from Boxes). Songs followed each other in a very fast mode, Paul Smith (nothing to see with the stylist) exchanged a couple of words here and there with the crowd in a surprisingly understandable french) and then too early it was over. No worries, no depressions, thanks God it’s a festival and it’s only the beginning!

Next on our list were The Temper Trap, now I will be fully honest, my friend were looking forward to them, I (shame on me) barely knew them, I had listened 3-4 times to their first album (Conditions) but somehow never fall in love with them (too bad i didn’t see them live earlier!). The australian combo put on fire the Domaine National de Saint-Cloud, their 12 songs set opened with “London’s burning” from their recent 2nd album named after the band itself. They managed to capture the track as of the first note, went trough several sing-a-long with them during “Love lost” and “Fader”. Musically they were great, the stage was packed and the fans ecstatic. They closed their set with early single “Sweet Disposition” and somehow left a hole of silence in the middle of the park. As said, I cannot call myself a Temper Trap connaisseur, but follow my advice, go see them life any chance you will have in the future, great live rock band are somehow rare these days.
Next on the main stage were Deus, we listened to the Belgian band in between bars and beers, not a big fan of them but in a festival context they were a good filler, not sure I will never be able to listen to one full album but they were a good enough soundtrack to lay down in the grass, sipping a beer talking shit with your best friends. 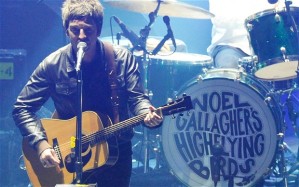 Now to the heavy weights, the champion’s league players of the night. Darkness in Paris is welcomed by Noel Gallagher on the main stage, now for oasis-maniacs, watching NGHFB @ Rock en Seine comes with a strange feeling as in 2009, around this exact date, in this same place (on the friday night though) the final fights between the Gallaghers brothers went on stage and that night closed curtains on Oasis careers leaving thousands of fans in despair in Paris (and in Milan where me and my friends were waiting for them the day after…) and around the globe. Anyway, Noel comes on stage and at no point mention that fact or his brother. I won’t spend 4 pages talking about NGHFB gig, that’s the 5th time i see them in one year and what I could notice is that Noel is now much more comfortable in his role of frontman after one year of heavy touring around the world. The share of Oasis’ song has been decreasing over time as new recent songs from the new band were being written.  Tonight during his 1hour long set, over 13 songs only 4 were from the Oasis times: the opening It’s good to be free, a majestic version of Half the world away and the 2 closing anthems Whatever and Don’t look back in anger that closed the gig leaving old Oasis fans hugging with strangers all over the place and remembering how good times were when Noel&Liam supported each other and delivered 2 hours concerts filled with tunes, rage and rock’n’roll. The crowd is mostly formed of old Oasis fans that show to like Noel’s work receiving If i had a gun with a huge roar and singing most of the songs along with him. Show was short but great, even though honestly, most of people left the gig thinking that hopefully for money or fame one day Oasis will be back together and this whole circus of Beady Eye against Flying birds will be over and we will hear Liam raucous cocaine-modified voice sing over the Wonderwall riffs pinned by his older brother himself.

Finally: the Black Keys, probably the main reason for which 80% of the people gathered in Paris that Saturday night, personally I was very much looking forward to them. We all had good reasons to be excited about them, they deserved the excitement and paid back the fans throwing a 17 long setlist spanning all over their 7 albums career (even if 75% if the crowd probably knew them only because of the recently issued “El Camino”. Dan Auerbach (guitar and voice) and Patrick Carney (drums) start the set with the help of 2 touring musicians playing bass, guitar and keyboards in some songs. I was a bit disappointed by this, one of the best live shows I’ve ever witnessed were the White Stripes. Now the Keys are often compared to them because of the same set-up (duos guitar-drums), the Stripes though used to deliver endless gigs with Jack White filling in with his vintage guitars all the hole potentially left by missing band members and instruments. I changed my mind pretty quickly watching this enlarged Black Keys as the quality of the musicians brought a full more powerful sound to their songs as they kick it of with “Howlin for you” , ” Gold on the ceiling” was received by parisian fans with high appreciation as the supporting musician went off and left the duos in control of the whole stage with Dan Auerbach gaining great appreciation in my life for his musical/vocal skills. Lonely Boy (the songs for which half/all the people around us were there) came last before the end and blew Rock-en-Seine festivaliers leaving us with a great taste of rock’n’roll guitar in the mouth and in the desperate need to get more, see more and absorb more of this kind of heavy guitar loaded bands.
Night’s over, everybody is tired, happy and slightly drunk when we face the only challenge of the day, grabbing the metro to go back home. 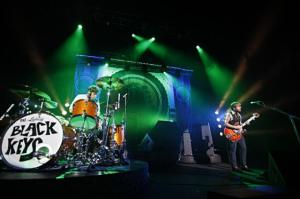 Rock-en-Seine will never top my list for best festival in the world, it will probably never reach the aura of legend that comes with Glastonbury, Fuji Rock, T in the Park or Coachella but trust me, if you ever see a band worth playing there, seize the opportunity and you will spend a great day swimming on the rocking shores of the Seine, add some friends on top, bring your own fags and enjoy without moderation. Hey Hey, My My…
by Supersonik