That’s the one word I would use to describe last night’s concert. I would recommend Julia Stone as the official definition for this adjective on Wikipedia. Or something of that type.

Let’s start from the beginning. First the venue: The Rocking Chair in Vevey. Vevey?!? I hear you ask. That’s right. This beautiful ghost town does occasionally do more than reminisce about the good old days of Charlie Chaplin and act as a Pleasantville for Nestle employees.

Earlier this year it hosted the wonderful Nox Orae festival which I raved about a lot. And again it had the pleasure of hosting the grace of Julia Stone. It’s a small intimate room but they seem to manage to get some serious gems. And I am sucker for small intimate concerts so did me just fine.

Anyways, so the concert started with the supporting act named Paul Thomas Saunders. At first as he peacefully strum his guitar and sang to a slow sad song accompanied by his blond bangs shy vocal companion the first thing I thought is, he’s got a great clear voice. But then to be honest it all just merged into one very depressive 30 minutes all about heartbreak and disaster and the girls which he use to like when he was 16 (when he seems only to be 17). It really peaked when I was starting to think that slitting my wrist was what he was trying to get me to do and he began a song with lyrics along the lines of: today is a good day my father died today. I realized at this point it’s too much for me. There was no variety, it was all very sad and with only a guitar to add something to the atmosphere and it all ended up being flat. 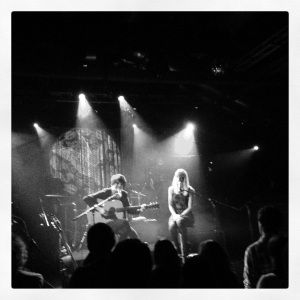 Hopefully as he grows up he’ll learn to develop his talent with a little more light and shade and depth.

Now onto Julia. Oh darling Julia. I had seen her about a year ago with her brother Angus at D!Club in Lausanne (you might know their famous Big Jet Plane, which surprisingly enough she did not sing). And they had been such a sweet duo. Angus, brilliant and shy and Julia skipping around the stage and melting everyone’s heart with her endearing personal stories and adorable geek style giggle. Even though they sang a couple songs together it was clear already back then that they were more two solo acts using each other for a boost and companionship. So it was no surprise when Julia started touring on her own this year.

Nothing much has changed, Julia is still as cute as ever. However the added sound of a 3 piece band behind her is really powerful and complementary (especially the piano – although I have a bias). She starts with a sweet charming song and then second up ahead is what I came to watch. She sang Blood buzz Ohio, a cover of The National. As I hold The National on a very high pedestal (and so does the general Indie public) I would be very wary of trying to cover the song. But she definitely does it justice and does what every good cover tries to achieve: she makes it her own, it’s different, it’s new, it’s original. And she delivers it oh so powerfully.

Talking of covers she also does her famous Greece cover of You’re the One that I want that is oh so cool. She also does a solo on the piano of one of her older song called Chocolates & Cigarettes that really shows of her raw talent. Her voice and her on the piano, amazing. Another highlight was the wonderful Let’s Forget All the Things That We Say and It’s all Okay. 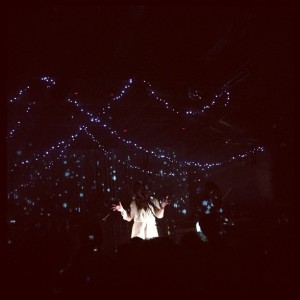 I am once again amazed that her voice has such a distinct tone and resonance. Sometimes it seems that Julia’s voice is a cave and the sound echoes first in her mouth and then through the whole place. She makes it looks so easy to careless sing and put on a beautiful melodious show but every now and again she breaks from her sweet, innocent cartoon voice and really BELTS it out. And that’s when you realize just how much power and control her voice has and shivers go up my back.

She also still has her adorably sincere love stories. Julia doesn’t stop at bewildering our ears with each song, she steals our heart  in the breaks with her oh so honest and charming failed love stories. They mainly revolve around her feeling very strongly for a guy (lucky bastard in my opinion) which leads her to write a song for him. Then he either doesn’t understand it’s about him and sends her back a random song, or his new girlfriend shows up as she is about to perform it to him. Poor thing. However she so refreshingly admits and basks in her imperfection and embarrassing moments which is so rare in stars and singers these day, all interjected with her loud, uncontrollably geeky humor that we all can’t help but fall in love with her. 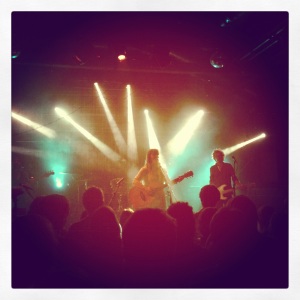 And so we all clap loudly after every song and especially just before the encore to get her back smiling and giggling back on the stage.

We tried a second time to convince her to come back, but didn’t manage.  So no Wasted for me.

And so as we drove back home with her resonating in our ears and pieces of our heart.