So it is no secret to anyone that I adore The XX. I have given them out several times as song of the day and I even wrote a special long review of their new album because I enjoyed it so much. I also reviewed their performance at Open’er Festival. However both times that I have seen them has been a festival (the other time was Primavera 3.5 years ago). So it was good to finally catch them at their own dedicated show. 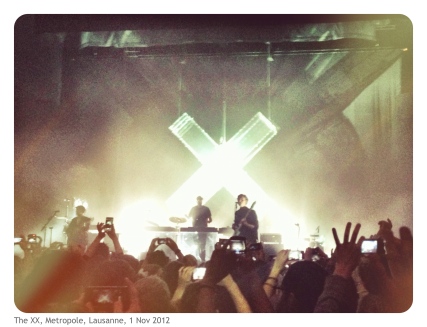 The concert was held at Salle Metropole in Lausanne. It was my first time there and I was quite surprised that they had invited the XX. The venue is reserved for big shows (Cirque du Soleil) and classical concerts. I was expecting more a venue like Les Docks for this type of band. But I think that after the huge success of their first album, serious money was pumped into their second tour and they probably needed a venue with high technical offering to fully maximize all their equipment.

The venue foyer is beautiful, there are three levels and large circular holes in the middle of each of them with a massive light. It really gives a grand theatre Titanic-era glow to the place. It’s one of those venues with a standing floor and a seated upper level for concerts, just like Olympia (Paris). And to be fair although I struggle with the task of sitting during a concert, the XX is a type of concert some people may feel more comfortable sitting to enjoy. 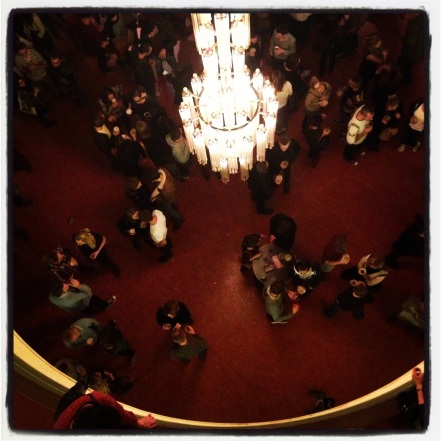 The show started in a beautiful gloomy atmosphere with a thin black curtain covering them and a white visual being projected onto it. However a close claustrophobic faint situation unfortunately made me miss the first two songs so I cannot comment more.  Anyways two minutes to gulp some water, take in some fresh air and I’m back in to find a pretty vibing crowd for Switzerland standards. People are cheering the band and I’m impressed that we managed a semi enthusiastic crowd. The first song to really strike me is Our Song, the last one off their new album Co-exist. 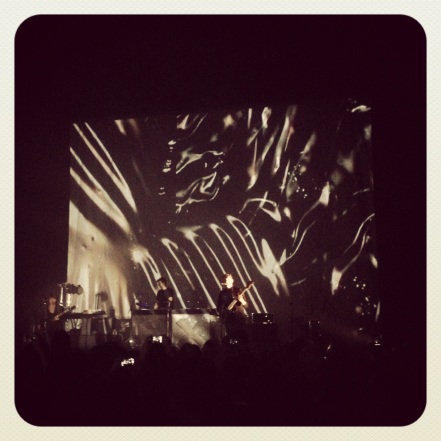 That is a secret favourite of mine. It really accentuates how raw and vulnerable Romy and Oliver make themselves when they sing from the very bottom of their body. It also highlights just how much they are the masters of minimalism. I’m sure I’ve written this several times but this band really makes every single song so incredibly perfect, clear, and impactful. They are also the kings of control. Songs start generally slow, speed up, beat up, build up, crescendo but never quite get out of control or break loose. It may be this beautiful restraint that gives The XX their signature sound. That and the BOOMING base that they love to abuse so that the entire ceiling, lights and every bone in your body vibrates.

Just like in Open’er this show accentuates is just how much Jamie Smith (known as Jamie XX) has grown and how important his contribution is to the group has become. Not only did Jamie create the majority of the beats LIVE on the millions of machines and instruments he had layered out behind the two vocalists/guitarists, he also mixed and interlinked song to song in a completely original way. This made it possible to really feel we were living a unique experience as songs were tweaked; their tempo and accents mixed up and stitched into each other, keeping the audience on their toes.

On a few songs (Reunion, Swept Away) Jamie finally literally got the limelight he deserved when a huge spot lit up above him to bring clarity to his important contribution. I was hypnotized by his fingers moving all over some magic buttons during Hearts Skipped a Beat. However I was shocked he did not come centre stage at the end to partake in a proper bow. 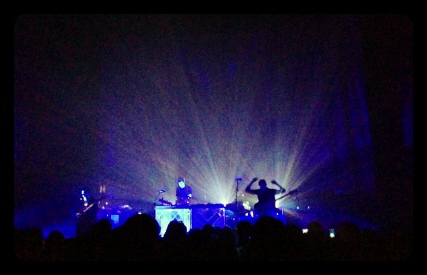 Although Jamie received more attention than in the past, the star of the show was Oliver. His confidence has grown immensely from when I first saw him, just after the release of their first album. He struts backwards and forwards on the stage, throws his body in different angles, and continues to have his signature way of playing his bass guitar: in a very swinging flowing motion almost creating an eight as he strums the strings. His voice is as powerful yet clear as ever. However although Romy nailed every single guitar solo to the split second and mesmerized us all with the vulnerability in her voice, she hid in the shadows in this performance.

But the most amazing addition to the show was by far the LIGHTING. WOW. To begin with the XX’s music is naturally mystical, their look is dark and mysterious and even listening to them in my room takes me to another magical land. But boy did they maximize this with the lighting. At first very simple and gloomy: mainly black and white. The engineers know not to underestimate the power of shadows. They then added three very powerful ‘windmill’ type of lights cutting the stage horizontally and made us standing crowd feel like we were in a dark marsh. The light then turn vertically and created waves of light that Oliver danced through. Very effective. Slowly they introduced colours. First a sunset ray feel, then some very powerful green rays that broke on the singers head. It really felt like being on a different planet. 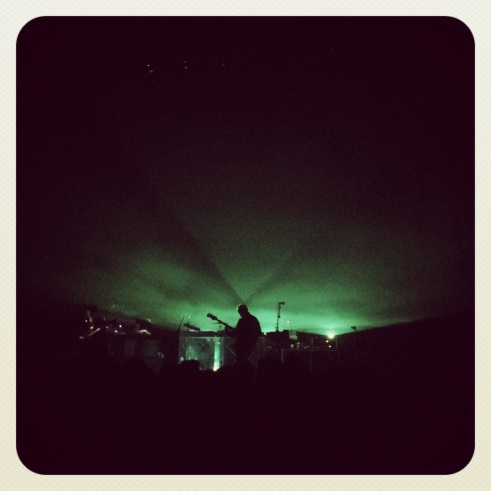 This came to a climax and the end of the first part when a curtain was lifted to reveal a huge X at the back of the stage. The crowd cheered like mad. Then the band disappeared off the stage as the huge X filled up with smoke. Surprisingly enough they came back up for an encore (something I have never seen them do) to the relief of the screaming crowd. The encore was long 5 maybe 6 songs and by the end of the show they must have played nearly every song on the two albums. Oliver continued to assure us in his calm, near depressed voice that they were very happy to be here with us. Although it’s hard to feel it in his spoken voice, we all heard it in their singing, in their instruments, in their presence and in the atmosphere created that they had generously and sincerely gave us a little part of their magical far away land. 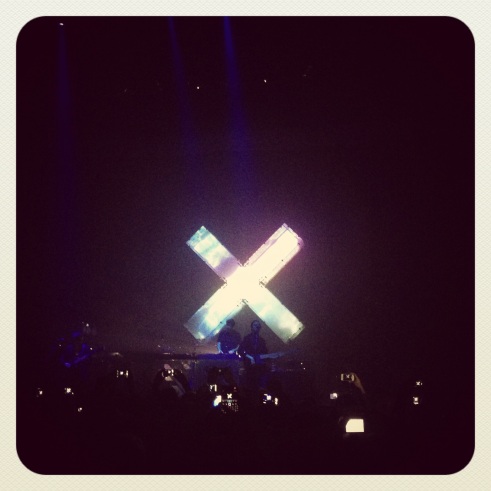