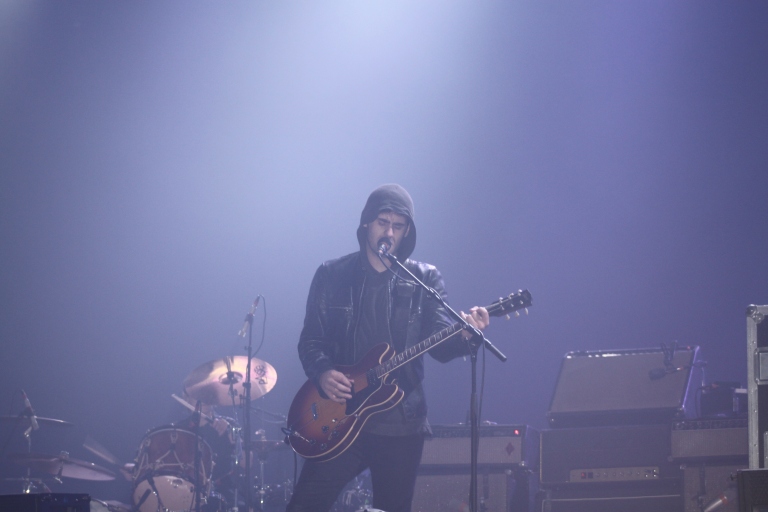 Tonight it was the 7th time I was watching BRMC live, more than 10 years after the first time in 2002 at the Reading Festival. The risk when you see a band developing and growing over the years is that at some point in time either live or on a new album the might disappoint you. This hasn’t happen so far with Black Rebel Motorcycle Club that actually gig after gig, album after album manage to actually increase my respect and admiration for them. Today after a great concert and a nice interview (Read here our exclusive interview with the band!) I have still confidence that rock’n’roll has a role to play in this world as long as bands like BRMC keep on bringing around the world their music, sound and messages.

Last night they were playing in Crans-Montana @ Caprice festival in one of the most posh festival location of the world and they definitely managed to conquer a very demanding crowd.
They started the concert on time at 8.30pm (hey, it’ still Switzerland, being on time is important), kicking it off with their new single: “Let the day begin” (that as we covered already in one of our past Fuckin Monday) it’s a cover from the Call the band of Robert Levin (bass player) dad’s. Two new songs followed: Rival and Hate the taste, two of the most powerful, raging song of the new album (Specter at the Feast) planned to be released next week. As of song #4 they went fishing in their past discography with Beat the devil’s tattoo from their last album followed rapidly by the song that is probably recognized as their best anthem: “Whatever happened to my rock’n’roll” from their debut album. Ain’t no easy way from the more acoustic third album “Howl”, Berlin from Baby 81 and Love Burns closed a first half of the concert that saw a nice balance between new songs and old classic tunes. The band appears in great shape and the crowd is slowly warming up. As usual Peter and Robert switch roles between songs vocally with Robert moving without hesitations from bass to (semi) acoustic guitars to electric guitar and back to bass. Their sound is as powerful as ever, creating, even on a rather small and sound-unfriendly venue the famous an impactful wall of sound that marries perfectly with their voices. They are a classic rock-trio with the sound power of a 5 piece (at least!). Peter’s voice is as loud, raucous and powerful as ever and his musical skills allowing him to play harmonica and guitar at the same time plus singing bring something unique to every concert.

The closure is as powerful as it could be with “Six Barrell Shotgun“, (featured this week in our Fuckin Monday) and closed (too early) by Spread your Love, from their debut album.
That’s probably the only problem with BRMC or any other band that is around long enough to have a minimum of 5 albums released, they will never play long enough to cover all the songs you like. Last time we saw them in 2010 it was in London for their 1000th gig and they played the best song from each album in chronological order for a total of almost 3 hours. even then we couldn’t hear all the song we would have liked. Forget about a festival one hour and a half long gig.
Anyway, we are here to review them based on what we could hear and our unanimous judgment is definitely utterly positive, the new songs sound as BRMC as ever and fit nicely into the past discography. The balance we can hear in the new album between rock, rusty songs (mainly sung by Peter) and more introspective, calm, sometime acoustic songs (sung by Robert) is clear, clean and enjoyable. Not many other bands out here can bring to life a similar, well balanced dual leadership.
They managed to build over the years a unique sound immediately identifiable with BRMC with a powerful bluesy rocking wall of sound that can blow you away easily.
Rock’n’Roll was as alive as ever last night in Crans-Montana. Thanks God some band are still taking care of our tortured rocking’ soul. Long Live to the Black Rebel Motorcycle Club, definitely one of the best live band currently around.
The Set-List:

Hey Hey, My My
Supersonik