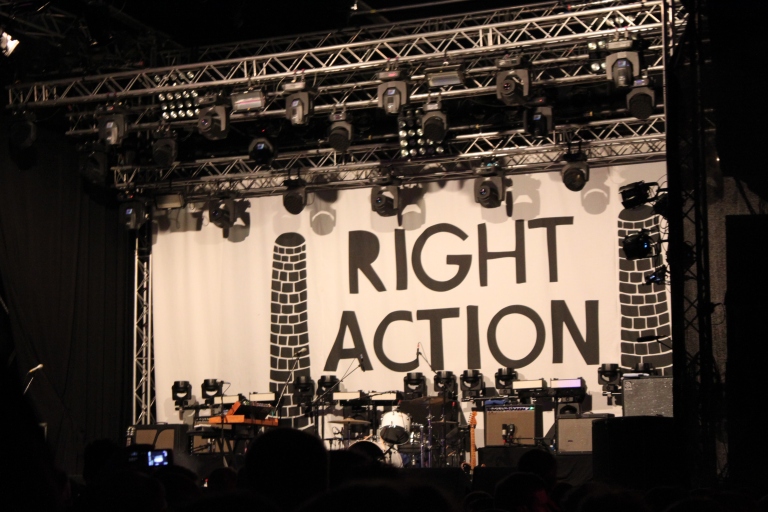 Last time we saw Franz Ferdinand live was in Milan, in 2009, the few song we had heard from their upcoming 3rd album left us wondering: did the band lost their “Mojo”?

That’s more or less the mindset we had yesterday afternoon while approaching the For Noise Festival in Pully near Lausanne: did they got their Mojo back? Straight answer? A big YES, definitely YES.

The new album sounds great and the songs sound better live than on the album, Right Action, Love Illumination will soon be classics in their set lists. They still have a special skill to make people dance and the new songs quickly captivated a very energetic Swiss crowd. Alex Kapranos is a hell of a front man and he proved it keeping the (traditionally shy) Swiss public dancing and singing for almost 90 minutes.

The band came on stage punctually at 10.15pm, after a short piano intro they warmed up the crowd with “No You Girls” from the third album “Tonight:…” at the end of it Alex Kapranos, singer, guitarist and spiritual leader of the band addresses the crowd for the first time introducing the band in french: “Bonne soir, nous sommes Franz (France?) Ferdinand“. “Right Action” and “The Dark of the Matinee” with their dancy rhythm got the people to start shaking their booties.

“Evil Eye” from the upcoming 4th album “Right Thoughts, Right Words, Right Action” is probably the missing link between the first 2 albums and “Tonight:…” an “Eminem-esque” (blasphemy?) riff disguised into a typical Franz Ferdinand rhythm and the fans seem to appreciate.

After the song Alex jokes with the crowd: “Dankeschoen, we are still Franz Ferdinand but that was new, so this is something old“, he didn’t have to finish the sentence for the band to start “Do You Want To” the 3000 people of the For Noise go berserk, fully conquered, nobody stopped dancing, moving and clapping until 11.30pm when the concert finished.

Mr Kapranos likes to interact often with his fans and when he asks for some noise from the “For Noise” , a massive sing along of “Lucky lucky, you’re so lucky” is the payback he gets. The old songs like “Walk Away“, “Michael” or “The Fallen” (with a triple lalalalala chorus sung by the crowd) get everybody to sing. As the  new album was released just the day before we wouldn’t pretend to have everybody singing the new songs like “Stand On The Horizon” or “Bullet” but the feedback they get from the fans is in our opinion very positive, as everybody keeps dancing, turning the For Noise into a strange indie-goa in the middle of the forest. 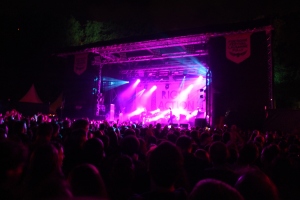 The pinnacle is reached after a short fast cover version of “I Feel Love” form Donna Summer when the band delivers “Take Me Out” and the new single “Love Illumination” in a medley-like execution. It’s exactly at this moment that anybody who thought that FF had lost their mojo (like us) understands he was (and we were) wrong. Alex and company are as alive as ever, they might be back from death (as in an interview Alex mentioned that he almost split the band in 2010) but as Paul (the drummer) confirmed to us in our interview with the band, the are as motivated as ever, and we definitely see it while they rock the stage @For Noise.

“Ulysses” sees the rain starting pouring down on a crowd that seems not to notice it as everybody is so focused and turned on by the 4 “Scots” on the stage. Alex Kapranos kindly asks everybody to “Fuck the rain” and launches the band into 2 (!) false starts of “Jaqueline” before getting chords and tone of voice right. “Outsiders” ends the concert in mayhem when the all the band members join our friend Paul Thomson on the drum kit to close the concert with their classic drumming queue.

A decade ago, in 2004, Franz Ferdinand were the headliners for the 2nd wave of indie rock relaunch (after the 2000-2001 Strokes/White Stripes revival). They were the first ones to really put back the word “dance” next to “Indie”. They are back, in style. Taking over the world to remind everybody where all this new wave of indie-dance rock started. Who’s your daddy now?

A couple of words on the For Noise Festival: is this the best small festival ever organized in Switzerland? Great friendly atmosphere among festival-goers, staff and security, everybody smiles, perfect logistics with shuttle busses for the car parking every 5 minutes. Long live For Noise, you might look more like a village fest than a rock festival, but that’s how we like it sometimes. See you next year, we will definitely be back.