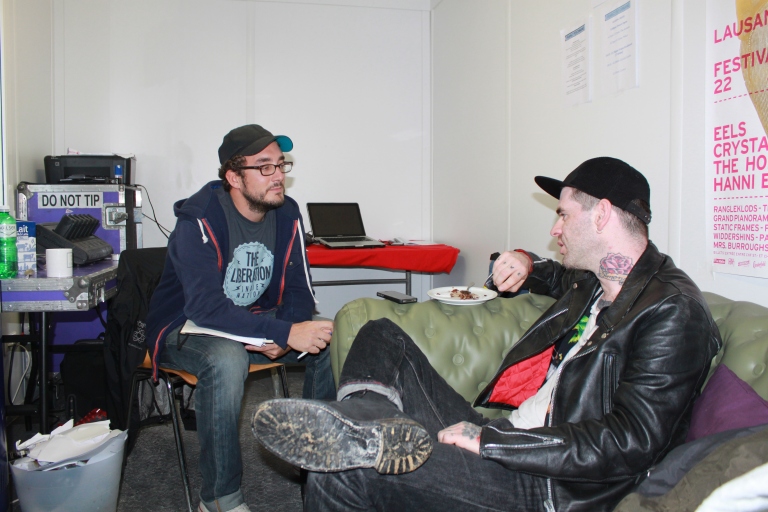 On top of getting to see Franz Ferdinand at the best small festival of Switzerland last Saturday (read here our concert review) we were as well lucky enough to get to talk to the band. The afternoon, before the concert we got to spend some time with Paul Thomson, funding member, drummer and back up vocals of Franz Ferdinand.

During our chat we talked about their new album and how the band needed a break before starting to write the new album released just last Monday, we debated about Spotify and the recent feud started by Thom Yorke against it and obviously, as usual, we talked about music and played our Indie Rock Weekly Survival Kit with him (stay with us as of Monday to discover it!).

Before jumping into the interview we need to say thank you to a couple of people: Eliane Weber from Musik Vertrieb, Aline Mean from the festival Press Office and the full For Noise Festival staff, keep on rocking in the woods guys! Last but not least, obviously, huge thanks to Paul Thomson, for his patience to answer our questions while he was enjoying his well deserved Swiss chocolate dessert 🙂

The Liberation: let’s start by talking a bit about the new album, we went on the internet to listen to it and we loved it!

The Liberation: it looks like you took a step back vs. the third album and went back to the sounds and rhythms of the first two records, what do you think?

The Liberation: how does your writing/recording process works? Do you have any routine?

The Liberation: your debut album turns 10 next year, how did life changed for you vs. 10 years ago?

The Liberation: did anything changed within the band in the last 10 years?

The Liberation: Does it happen to you to listen to radio and think: “We influenced these guys! They sound like Franz Ferdinand!?”

The Liberation: Do you still do on the stage that trick of all the band members coming to drum on your kit at the end of concerts?

The Liberation: I’m asking because recently I’ve seen Citizens and The Vaccines doing something similar

The Liberation: Did you invented it?

The Liberation: Do you have time to discover new music?

The Liberation: what do you think of the recent feud between Thom Yorke and Spotify?