The festival season is reaching the end and we traveled to Zurich on Sunday to take part in the 3rd edition of the Zurich Open Air. The last of the 4th day bash saw Miles Kane and Black Rebel Motorcycle Club splitting the afternoon slot between 4 and 6pm.

The young scouser comes on stage smartly dressed, tight fitting pants and nice perfectly ironed shirt. He’s jumpy and energetic as usual as he kicks off the concert with “Taking Over” from his 2nd album. “Kingcrawler” and “Rearrange” from “The Color Of The Trap” debut albums starts to warm up the Tent stage as the crowd (well feeded by Miles starts singing “aiaiaiai”) starts to clap hands, jump and sing the first album tunes.

“Better Than That, “First Of My Kind” and “You’re Gonna Get It” turn the fans into a jumpy mob that follows every moment done by the former member of The Last Shadow Puppets. It’s at this moment that I understand what a good friend of mine told me before the concert: “the new album  has been written to be played live“. All the songs sounds more powerful and rock’n’roll vs. the album, Miles’ aggressive attitude and stage presence just adds another layer of energy to it that makes it impossible to stand put.

“Quickstand” makes the full tent tremble from people clapping their hands, “Telepathy” its a masterpiece played live, while I write this piece I can still see Miles’ chicken move (a la Mick Jagger) while he mixes the lyrics to sing about a condom inflated by a fan that is “floating out and in” just above our heads.

The end of the concert could see the full tent come down such is powerful the energy that the 27 years old “Modson” has been able to pass to the crowd. “Don’t Forget Who You Are” and “Give Up” from the last album prepare the stage for the usual grand finale of “Come Closer“. While the artists leave the stage the crowd keeps singing the refrain “AAAAAAAAAAAAAAA OOOOOOOOOOO” hoping for the band to be back. Vane hopes unfortunately.

The concert lasted one hour that looked 5 minutes. Miles Kane is not arrived yet, he starts having a energy boosting repertoire that can fill easily more than one mere hour of concert. As he mentioned to us in the interview he’s still growing, learning and building himself as an artist and as a live performer. Currently, on stage he’s a mix of Liam Gallagher arrogant/aggressive/don’t give a fuck attitude and Mick Jagger’s dancing moves. Not a bad benchmark for a front man.

The boy can sing, dance and most importantly he can rock. Future’s on his side.

Anybody else out there, keep him on sight. He will be headlining Glasto in a couple of years from now.

Enjoy the ride Miles. “Don’t Forget Who You Are” 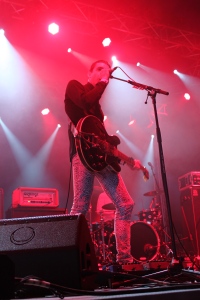