Going to a concert of a band you are a fan of, can also be a great opportunity to get to know another, usually less famous band, which however has an equal potential of musical greatness. This is what I felt with To Kill a King. This British Indie-Rock band, made up of five young lads, has all the cards to keep up with the biggest bands in a few years. Their sound drifts from quiet and melodic notes, reminding Bon Iver’s music, to heavier rhythms with lots of guitar riffs and drums. As if this were not enough to draw you into them, the singer’s voice is backed up by the other members’ echoes and chorus. Moreover, add to this a keyboard that with its range of notes clashes in a brilliant way with the repetitive beats and a magic atmosphere is created.

The opening song of the concert is the one that gives the title to their album: Bad Blood. Dan dances to the rhythm of the song while holding the microphone and singing as his grey hood covers his head and makes him look like a hip hop gangsta. He is electric. The shy Dan that you can see in the interviews is nearly unrecognisable in the young man who looks so comfortable up there on stage. He has certainly gone a long way since their first gig.

After the first few songs the frontman says: “Hi! We are Bastille!” first pronouncing it the English way and then, with a smile, the French way. He thanks the audience multiple times throughout the concert for coming down to see them, as if it were a great surprise that someone actually showed up. Indeed, Bastille underestimate the power of their music. 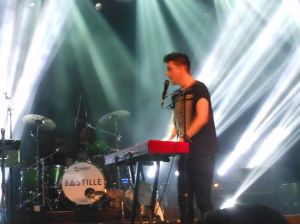 “Overjoyed” starts in one of those ways that make you hold your breath for a while before realizing you actually need to breath if you want to hear the rest of the song. The beginning and ending of the song says “Oh I feel overjoyed, when you listen to my words”. Dan, let me reassure you, we do feel overjoyed when we hear your words being sung so peacefully in this song!

In “The Silence”, Dan bangs the drums, their constant beat is topped by guitars, bass and keyboards which add a range of sounds collapsing with the repetitiveness but at the same time rendering it higher in tone and somehow colorful. The audience is clapping hands along the drums’ beats. Dan jumps in between the “And oh oh can you fill the silence?”. This is the music Bastille play, and live it is even more amazing than on the CD!

Hands are clapping keeping the beat for “Weight of the Living Pt. II”. During the refrain everybody is imitating Dan who is jumping up and down on the stage. A spontaneous question raises at this point: where does he get all this energy to simultaneously jump, sing, play and dance?

When they play “Icarus”, Dan climbs up to the side of the stage and sings from up there, jumping around as the public does as well. It’s impossible not to be pushed to move your body uncontrollably. As Icarus is flying the public longs to do the same following Dan’s voice in its ups and downs. Dan announces that they are going to play a new song and the notes of “The Draw” start making their way into the audience’s ears, what a pleasure! The rather dark beats of the strophe are enriched by the majestic refrain where the draw seems to pull back Dan’s voice as well as himself.

While singing “Flaws”, Dan comes off the stage and walks among the audience to the very end of the venue and up the stairs to reach the stalls. This is for sure a clue moment of the show. Chapeau Dan! Because not every frontman has the guts to do that and face the devoted crowd.

“Of The Night” gets once more people feeling as if X-Tra were a dance floor. Here Dan and Kyle simultaneously beat on the drums with all their strength, it feels as if they are reproducing an intense heartbeat. Goosebumps are soon to appear on the fans’ arms as chills go down their spines. This song is an outstanding cover/mix in a Bastille key of the 1990s song by Corona “Rhythm of the Night” and of  Snap’s “Rhythm is a Dancer”. It’s all about finding the right rhythm here and Bastille certainly found it. Besides being the rhythm of the night it’s the beating of our hearts.

“E e o e o e …”. Here it is, “Pompeii”, for this last song Bastille are joined on stage by their talented support band who are given the chance to sing along and play the drums with them, ending in this lovely way a brilliant concert.

See you guys in Malley on the 23rd of March 2014 for another amazing concert to look forward too, in the mean time we will practice our dance moves!