“The weekend has landed” to quote a famous film from the 90s. As we weren’t invited to the Scala opening season (traditionally on December 7 since 1940) after exploring the variety of opportunities offered by a Saturday night in the city, we decided to keep on with what I’m calling the Glastonbury13 revival.
Another UK band was playing in one of the historical (one of the few that survived) venues in Milan: the Tunnel, small and claustrophobic, but still one of the best sound you could find in town.
The gig was sold out and the atmosphere was very “brit” also because of the many English (or maybe Irish) fellas supporting the band. 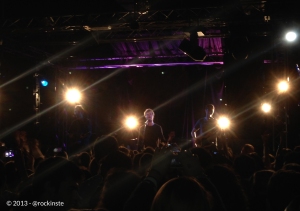 The Irish Kodaline played almost all of the 14 tracks of their debut album In a Perfect World (some of them already filled in the several EP released before the album).
They were very catchy and engaging from the stage. The frontman knew how to build a connection with their many fans among the audience and almost everyone in there knew every single world of their songs (sometimes even covering the singer voice) which was quite impressive for an italian gig.
At some point, Steve Garrigan started to talk about his childhood and meeting the other members as kids before to set up the band… so cute of him!
So the set-list flowed off pleasantly and the sound was more rock than the album: a soft start with the raising “After the Fall“, a slower “Lose Your Mind“ enriched with the “Dirty Old Town“ intro and a U2 tune “All Comes Down“ as a conclusion before the one song encore. It was an epic version of “All I Want“, mostly shouted from the audience, that made everyone happy and satisfied, even if it was very short (a bit less than a hours and half)…brief but intense, as some might say!

Kodaline demonstrated they know how to get “inspired” from their predecessors (from Travis, to Keane passing by Coldplay) without feeling plagiaropathetic and how to play live amusing their fan and interesting who doesn’t know them very well. Now the though part: they need to find their own unique way to survive in the dirty rock’n’roll world. We will look forward to a new album, before rewarding them too much.
As it was very early when the gig ended, we decided to attend another gig the same night. More about it on the next episode… 🙂
Enjoy the set list and the spotify playlist: Kodaline – Milan 7/12/13
Set-list