When you enter the Dublin Castle, in Camden 2 things hit you in the face: 1) it smells like a really pub should smell: beer and sweat 2) the posters on the wall of the bands that have started their career playing here (The Madness, Travis, Coldplay, Blur, Supergrass among many others) as the venue played a major role in the development of brit rock in the 90s.

We wrote already back in December 2012 (!) about GANGS (Read here our interview from back then). 1 year and half later the band has matured a lot and finally we were able to see them in live action during their first ever London tour.

As usual, when a new band appears everyone tries to compare them to somebody from the past. Last Monday I heard the following names: The Jam (with somebody claiming he was expecting to hear “Town Called Malice”, The Smiths, Oasis, The Kinks. Just to set the bar high enough.

Honestly? There’s a bit of all these bands in their sound and style, but all of the ingredients are mixed nicely and evenly enough so that I don’t agree with anyone labeling them as “The Irish Jam/Smiths”. They are on the way to build their own sounds and style.

The sound and the lyrics have evolved a lot since we heard about them for the first time, after a shy beginning of the set with poor sound management they get confidence as the crowd started swinging and clapping at their songs. 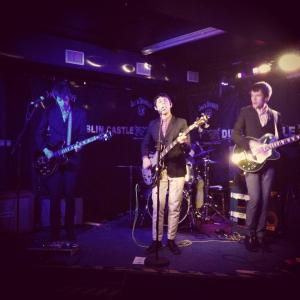 It took them 3 songs to win the crowd and by the end of a set with “Come On Let’s Fly“, “One of Our Own” and “Saviour” the public is already singing the refrain and choruses.

When the set finish they get called back on stage for an encore, “2:15” their latest single, bravely left out of the planned set, quite an achievement for a young gang of irish lad hitting a cold London Monday night for the first time!

We hope that some of the enthusiasts around us in the crowd were professionals, these lads deserve the chance to prove their musical skills on a real record.

They have the songs, they have the talent, they don’t lack style or attitude. They just need a chance to prove themselves!

Hey Hey, My My, rock’n’roll will never die (as long as bands like Gangs keep it going!)