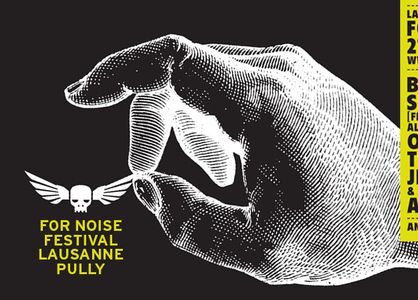 For Noise Festival in Lausanne-Pully is a cozy and beautiful small festival set upon a hill in the middle of an enchanting forest. The fact that it is a bit hidden adds to it an alone of mystery and charm. The line-up of the festival is accurate and oriented towards people who want to make new discoveries and see bands who are not often touring over here like Beirut. A first experience at this festival which leaves me with the longing to go back next year, and you music-lover out there should all do so!

This Swiss singer has a truly beautiful voice, with the extended vocal range she has she can go pretty much where she wants. On stage she is accompanied by her band which includes a girl playing the guitar and two guys playing the drums and keyboard. There are a synthesizer and a piano in front of her, she records some vocals before and reworks them while she sings over them again and while her band plays. Her songs are a bit electro thanks to the synth broken at times by aggressive but melodic guitar solos, while other songs sound more delicate because of the piano.

A talented ginger lad with a touching voice and an acoustic guitar. No, I’m not talking about Ed Sheeran, although there may be some resemblance. But this guy deserves all the success that Ed Sheeran has because, as the latter, he has talent to sell. His set is really intimate, DeMovie Salon is a rather small and cozy venue. On stage it is just him and his acoustic guitar. He mostly plays sad songs, which are characterized by his aggressive way of playing the guitar clashing with his rather soft and warm voice as well as the touching lyrics. To introduce the song “So Long” he says it is about the more than 500 gigs he played so far and the amazing people he met. He delights the public and makes them dance to the country cover he plays. Some of his songs start very slowly and the acoustic guitar comes in almost unexpectedly and makes you sort of wake up from a dream towards which his voice gently showed you the path.

The singer of The Goastt (The Ghost of a Saber Tooth Tiger), Sean Lennon, is none other than the son of one of the biggest music icons: John Lennon. But this is not enough to make his band great, people have to work up their success and not base it on an image. In this sense The Goastt still have some work to do in order not to give the impression of being just a copy of The Beatles’ hippy phase. Their music drifts into psychedelic rock which is sometimes hard to follow. The resemblance of the singer with his famous father is obvious and he also wears the same round glasses, which may mislead people’s judgments towards their music.

The most awaited act of the day is finally here! Beirut are numerous on stage, like their multiple instruments. They start their set with one of their most well-known songs: “Nantes” taking the audience immediately into their indie folk enriched by the accordion, trumpets and trombones and the charming voice of the singer Zach Condon. Throughout the concert the singer also plays the ukulele joking and blaming the cold when it sounds out of tune at the beginning of the songs. They delight the audience with a smart selection of songs containing many world music influences such as jazz. A great journey into their enchanting music.

Thank you For Noise Festival for ending my Summer of festivals on a delighting note!