The lights inside Les Docks darken and here comes Tim Fite, a very talented American musician. However, he doesn’t only sing, he is an artist in all senses. His show is accompanied by a big screen on one side of the stage where for each song there’s a video footage being shown. Some of the videos feature a guy called “Sexy Leroy” and are really funny! His music ranges from hip hop to indie. On stage there are no instruments like guitars and such but only his computer and a remote control. His last album iBeenHACKED, which came out on October 7, is a proper artwork about technology and an exploration of how people’s life are affected by digitalism. Tim Fite’s facial mimicry is impressive, he could well be a comedian, the scary faces he does while singing are quite a thing! He is joined on stage by the two Bonaparte girls dressed as bad-ass pin-ups. He ran two quizzes for the audience, to which the answer had to be for the first one an high-pitched “Ouiiii” and for the second a low voiced “Oui!”. He also asked the audience participation to sing the refrain of “Burn It Down”, a funny story-telling song accompanied by a cartoon on the screen to which the public had to sing along: “Burn, burn it down down down down. Let’s burn it down”. In the last song, which is rather folky, everybody has the arms in the air as if they were trees branches. An unusual act but certainly entertaining and who can well prepare the public for Bonaparte‘s weirdness and circus manner!

There are four tall see-through mirrors placed in the front of the stage, so that the audience is at the same reflected in them and can see what’s happening on stage. Tobias Jundt, the lead singer and guitarist of Bonaparte makes his way preceded by the two other guys, drummer and keys player. There are also two girls dressed up in weird clothes and wearing masks, who stand behind the mirrors and start dancing as soon as they start playing. And here we are, let the circus begin with the first song “Umlaut In English” which sounds much louder and electro-rock live. Then on with the instrumental song “1-800” and as soon as the witty rock anthem “I Wanna Sue Someone” starts, the girls move the mirrors from the front of the stage and there’s Bonaparte clear to see. 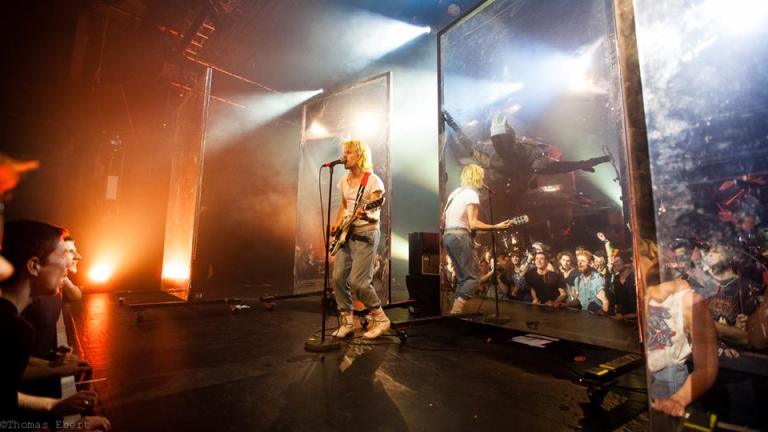 For the guitar based-hip hop track “Me So Selfie” Bonaparte is joined on stage by Tim Fite who raps in it. Certainly a funny combination! When they play “Two Girls” Les Docks becomes a rock ‘n’ roll club where the audience jumps up and down, the dirty sounds and the fast lyrics make this song one which is great fun to sing along to! During “Wash Your Thighs” the two girls come out once again, now they’re dressed with a skin coloured-suit covered in words taken from the song in it and they start their sexy moves as the song unfolds with its constant drums and electro beat in the background on which the voice of the singer gets even darker than normally.

Throughout the concert Tim Fite frequently joins Bonaparte on stage. At one point he starts sketching the stage scene on a flipchart paper, adding more and more details as the gig unfolds. For another song he joins the two girls on stage with a big hard paper iPhone and jokingly walks around the stage like that. I told you this was going to be a circus! At some point the two girls come on stage increasingly more naked and they’re moves become even more aggressively sensual.

Back to old school rock n’ roll energy once again with “Mañana Forever”, with the audience singing along and dancing. Going towards the jazzy piano of “Rave Rave Rave”, the audience is here asked once again to sing along to the chain of “uh uh uh ah ah ah”. They choose to get towards more quiet rhythms with the songs “Riot In My Head” and “Into The Wild” taken from their last album. They close the set with the addictive energy of “Too Much”, where words rapidly unfold one after the other following the keyboard rhythm. During the song the singer jumps off the stage and walks among the audience where at a certain point he crawls to the floor singing in an increasingly slower tone. A guy in the audience takes him up and puts him back on stage.

They come back for an encore with “Do You Want To Party”, perfect song because the answer to the question at the beginning of it “Do you want to party with the Bonaparte?” is a screaming “Yeeeees” which raises from the public. They play a few more song and during the song “If We Lived Here” the two girls close the mirrors once more which makes you think it’s the end of the concert … but it’s not over yet! They live the stage but the room is still dark and the audience’ screams get louder. The singer comes out and says “Come on Lausanne we want to hear you” and the audience screams louder and louder until they come back.
The mirrors are once again taken away for the rest of the party as the rock notes of “May The Best Sperm Win” are played, once again everybody dances to the tune until the mad circus resumes with “Wrygdwilife”. What else to say, we had a hell of a Bonaparty!

The setlist has to be shared because it’s the weirdest I’ve ever seen: for its length, for the number of encore and of course for the weirdest song titles! 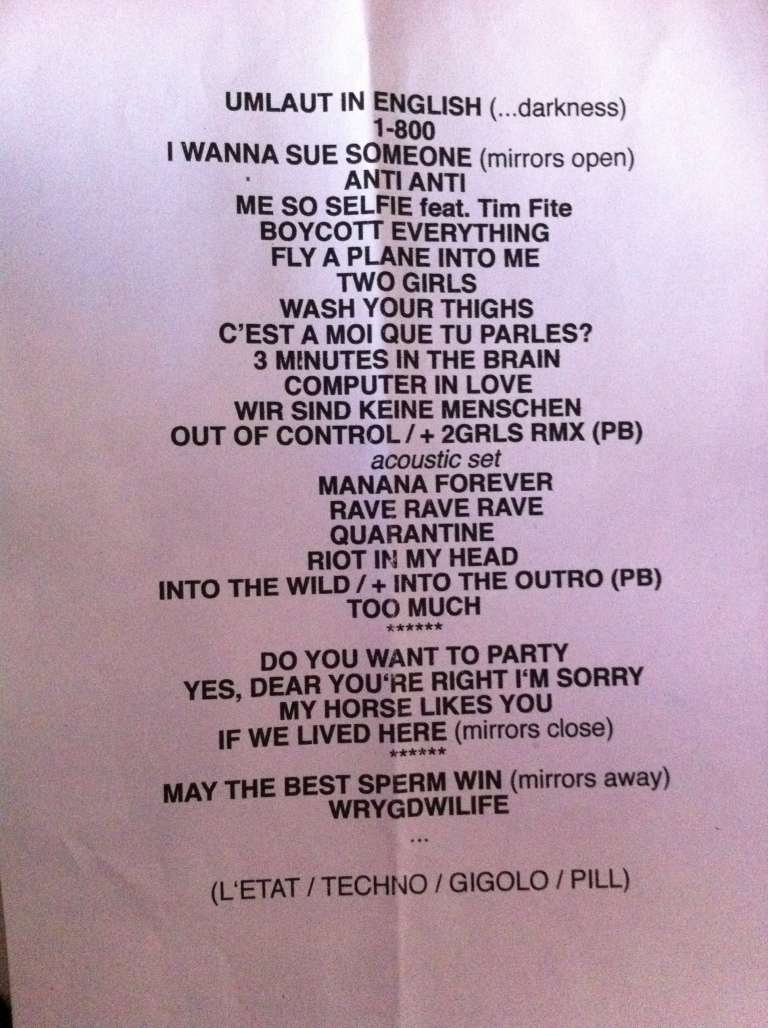