Ben Howard’s concert was organized by JustBecause at X-Tra Club in Zürich, being this the only Swiss date of his tour the audience was even more mixed language-wise than usual. You could hear many people speaking French and Italian among the usual Swiss Germans. This means his music gathered an entire population together, well done to him!

The first act to walk on X-Tra Club stage tonight is Jack Garratt, a British guy with a beanie hat on his head and a long ginger beard. He wears a T-shirt that pictures, as he explained during the gig, the owl version of himself. Despite his looks may be hipster the music he plays has nothing to do with that.

He has a piano, synths and a sort of electronic drums in front of him. He kicks off, almost unexpectedly, with powerful beats produced by his banging on the electronic drums, to which he adds his stunning warm voice. For the song “I Couldn’t Want You Anyway” he shows off his secret arm: an impressive and powerful falsetto accompanied by the piano and the beats breaking the rhythm. He also plays with passion the electric guitar, which gives his music an instrumental rock break. He is really entertaining and friendly with the audience.

He took the chance to present his new single “The Love You’re Given” in which the lyrics he sings are broken up by vocals and where the electronic beats are intertwined with the synths sounds. The electronic beats and the synths take over towards the end of the song creating a nice distortion of voices and sounds.

A must see, he is completely driven by his own music, which makes it even cooler to see him live!

The stage and the instruments are all set up, ready to welcome Ben Howard and his band formed by Andrew Bond, Mickey Smith, Chris Bond, Nat Wason and India Bourne. The lights get dimmer and the audience screams as the first members of the band enter the stage. The screams get louder when Ben Howard, dressed in black and with his usual scruffy hair, makes his entrance. The venue is still in the dark as he starts picking on his guitar the opening notes of “Conrad” and soon enough the right chilling atmosphere is created. As his voice settles in, the audience falls into a silence broken only by a few screams as the song goes along. He sings too beautifully to even be interrupted. It’s the turn of the rather lively “Time Is Dancing” where the picking of the guitar is intensified and where the lyrics unfold quickly. His voice is quite low at the beginning and gets higher in tone as they go on playing. The lights remain dark and at times the artists on stage look more like shadows.

Back to slow chilling with “Evergreen” and Ben Howard sitting on the chair gently picking the strings of his guitar. The lights still dim are lighted up at times but only briefly and discreetly. His voice seems even lower than usual, reflecting the dark tone of the track. For “In Dreams” the picking on his guitar is heightened once more and the palette of sounds is intensified by the double bass played by Chris Bond and the cello played by India Bourne. The humming and the backing vocals render the song even dreamier. In “Small Things” the guitar at the beginning sounds beautifully distorted. When he pronounces the lyrics “And I can’t see my love” the picking on the guitar gets harder and the sound is heightened as to create a tropical atmosphere. During the instrumental bits he often turns the back to the audience and faces the pianist or the drummer as to intensify the circle of sounds created.

Throughout the gig Ben Howard asks the audience how they’re doing and, smiling, he tells them it’s a pleasure to be back in Zürich. Laughing underneath his moustache he says “Hi!” to the people in the back. He raises his glass and utters a smiley “Cheers” before the start of the next song.  There it is “I Forget Where We Were”, the title-track of his last album. The audience recognizes the song right from the beginning and joins in singing. It is one of the only they sing as I guess many people don’t know the new album that well to sing along to each song as they would have done with those in Every Kingdom. During this song he takes the audience into a peaceful wander through multiple sounds until they are sort of awoken by his raising voice when he says “I forget where we were”. During “Rivers In Your Mouth” the guitar chords are enriched by the cello and the drums beats are constant in the background, creating a rhythm which towards the end is entirely left up to the guitar and vocals.

For some of the songs Ben Howard plays the guitar in a fascinating way, putting his right hand (he plays left-handed) on the neck of the guitar but from the top and changing the chords holding the hand that way and doing some tapping as well. The sounds created by playing this way are mind-blowing as well as a great pleasure to see. For “She Treats Me Well” the audience joins in singing the refrain “She’s alright, when everyone is wrong. She’s alright, let’s me waste another song”. There are maracas in the back rendering the song more exotic.

Ben Howard sits on the chair once again, he starts playing the notes of the stunning “End Of The Affair” and then he stops for a technical problem playing it down with a joke and a laugh. I was glad he started once again as the opening notes of the song are just mind-blowing, so you can imagine the treat in hearing them once more. An encouragement applause and then off again, the audience is now perfectly still and silent listening and watching in awe. After the instrumental intro he starts singing with a soft and warm voice. It is just him, the cello and the organ in this song. Starting slowly it all gets livelier towards the second half of the song where the guitar sounds get higher in fervor and where the pace is faster. On top of this he sings in a special distorting microphone which renders his voice rather echo-y. He doesn’t need to scream in the guitar although it would have been nice to witness that. But still, the beauty of hearing this song live is incomparable.

After having played only songs from his last album I Forget Where We Were, the next on the menu is “Oats In The Water” taken from his EP The Burgh Island, which could well be contained in the former for the dark sounds in it and the instrumental focus on the guitar and percussions. The lights turn up briefly as Ben Howard introduces his band to the audience who gives a round of applause for every member. He thanks the public once again for coming out to see him and his band. And then on with “All Is Now Harmed”, which contains percussions on which the rhythm of his voice moulds itself. An ocean of sounds is created in which his voice surfs switching from low to distorted with the help of the microphone. They bid goodbye and leave the stage, the venue remains dark and after a few minutes he and India Bourne are back on stage. They close the concert with the sweet and positive “Everything”, the only song taken from Every Kingdom to be played tonight. Here the audience, familiar with the track, sings along. As the song comes to its end, the audience claps and screams, he takes a bow and raises his glass one last time bidding goodbye with a sincere smile.

Choosing to play his last album in its entirety with only two songs taken from his previous works may have been risky since it hasn’t been around that long. However the quality of the music was impressive and hopefully also people who are more attached to his previous works liked his performance. The phrase “See you when the fog lifts” written in the “Thanks” section of the I Forget Where We Were album seems to resume perfectly the entire concert: an alone of darkness around the stage and the focus strictly on the music rather than on who is playing. A surreal experience that the lucky persons in the audience can cherish and print in their memory and hearts. A huge thank you to Ben Howard and his band for taking us into this stunning journey through the foggy world of I Forget Where We Were! 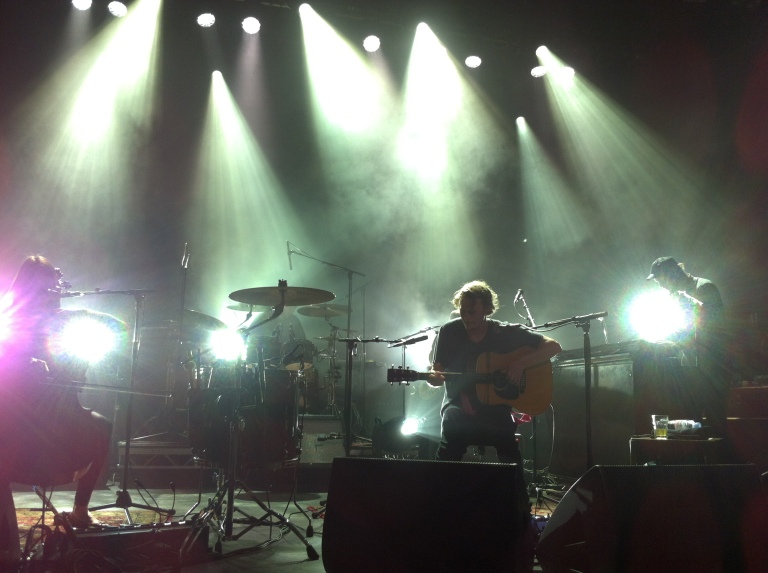