As I get to Les Docks, there is already a pretty long queue of people lining up to see Mighty Oaks. Despite that, I can still find a good spot from which to enjoy the concert. Mighty Oaks are playing here as part of The Golden Road Tour 2014. 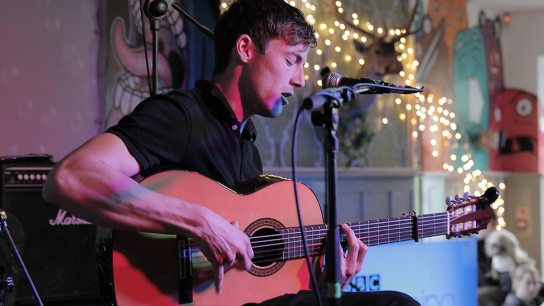 The opening act of the evening is Charlie Cunningham, an English singer/songwriter who plays classic guitar. His way of singing is more like talking and the songs he writes are interesting stories. In pretty much all of his songs he taps with his thumb on the body of the guitar while picking the strings. He has a typical British humour and in between the songs he makes some jokes and the public laughs. One of his songs is about doing heroin and, as he explains while introducing it, he has never done heroin but he may try it when he is really old just to see how it is. He plays another song about being a baby, adding that, “We’ve all been there”. The audience joins the tapping on the guitar with a clapping of the hands. Charlie Cunningham smiles and says this has never happened in a show before and he adds that we’re the best crowd! The lyrics are thoughtful; the sound of the strings of the guitar is constantly broken up by the tapping on the wood which gives a constant rhythm to the songs. He also comments on the great programme of Les Docks, saying that he is glad to be a part of it. A friendly and talented lad, his debut EP Outside Things is out now, check it out! 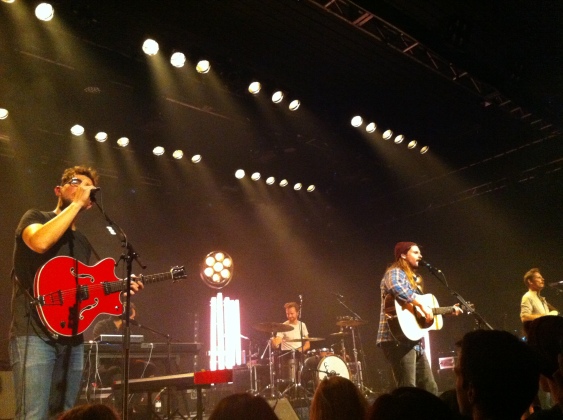 As the room darkens, the violinist and drummer enter the stage and start playing. The fans’ screams get louder as Ian Hooper, Claudio Donzelli and Craig Saunders come out on stage. They open the gig with the song “Horsehead Bay”, a great choice because it takes the audience by the hand and leads them to the discovery of the respective places where Ian (USA), Claudio (Italy) and Craig (England) come from. They add one instrument to the other and then they top it with their mark: the three-part harmony formed by their three voices, where Ian Hooper’s warm voice is backed up by those of the other two members. After the first song they thank the audience for coming down to see them and they announce that they will  also play songs from their EPs because it’s good for them and also for the public to get to know them.

They take the audience on a stunning journey through their colourful sounds with the guitars and the drums beautifully intertwined. The violin comes in giving it sometimes that touch of Irish folk and other times adding a more melancholic melody to it, whereas the piano creates a relaxed atmosphere. To introduce “Back To You” they say they released the music video which contains footage from their tour over the Summer and all the places they’ve visited. Besides the journey into music there’s the journey into new lands! Things get wilder when they play “The Golden Road” from their studio album Howl, during which a brave girl from the back does crowd surfing and surprisingly they get thrown underwear. As the song resumes, Ian comments on this saying that it never happened at their shows and thanks the crowd for being so good and special! When announcing “Brother”, their most famous song, Ian says: “If you know this song sing along and move your ass to it!”. The audience does indeed as it is told, happily singing along to the refrain “I’d follow you to the end of the world if only you would ask me to” and dancing to the music.

During the numerous instrumental bits, where the various instruments are played with passionate power, the lights flash white in tune with the music. Ian Hooper other than playing the guitar also plays the mandolin and ukulele which give the music a more folk touch. Claudio Donzelli plays the piano and the guitar, intertwining delicacy in touching the keys with the more determined way of picking the strings and the opposite in certain cases. Ian introduces one of the songs as one which was written in their early career when he found out his mum was sick (she eventually passed away in 2012). He thanks a man for rising his glass to the sky. Their songs are really touching, and like this one, are inspired by things that happened in Ian’s life. By attending one of their concerts you can feel straight away that these guys have an incredible empathy, they can connect with the audience in a way that I’ve rarely seen. I believe this is how a great band should be, not boasting about popularity or such things, but just be down to earth. Because, after all, they are normal people like us they just happen to have a job which puts them at the centre of attention. The challenge is to remain true to what they believe and Mighty Oaks are doing a great job so far, so let’s hope they won’t change.

Throughout the show the band underlines the importance of the place they come from, they are based in Berlin but they all come from different countries. In particular, Ian who comes from the mountains near Seattle (USA) points this out in their songs. When they play the lively “Horse” everybody gets dancing, this is a folk tune per excellence in which the mandolin and acoustic guitars are intensified and played with impressive strength. The last song before the encore is “When I Dream, I See”, hearing it on the album gave me chills, hearing it played live did  even more so. The three-part harmony here is beautiful and quiet, and it builds up to be overtaken by Ian’s voice in the refrain. Before leaving the stage Ian says to the audience “I want to thank you once more because you gave us much more than what we deserve”. The audience answers with claps and screams, another way to say that they do deserve this and more.

They come back for an encore, which includes “Howl”, the title-track of their album. For the last song, during the final instrumental bit Ian gets down into the crowd playing the mandolin circled by the fans! Mighty Oaks are a rather new and incredibly talented band but they don’t take anything for granted at all. These guys are really simple and this is what allows them to connect to the public in this way and being such an amazing live band. If you missed this gig don’t let the next ones escape, this will go down with one of my favourite gigs, no kidding!

Horsehead Bay
Rainier
Seven Days
The Great Northwest
Courtyard In Berlin
Back To You
You Saved My Soul
Picture
Like An Eagle
The Golden Road
Brother
On The Rain
So Low, So High
Horse
Just One Day
When I Dream, I See
Shells (encore)
Howl (encore)
Driftwood Seat (encore)