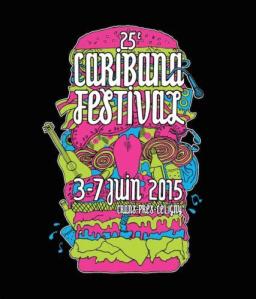 So this was definitely the reggae night at Caribana Festival, perfect to lay back and enjoy the vibes! The public swinged to the colourful multi-instrumental songs. With a touch of electro-pop and funk towards the end of the night. Let’s see the artists who made all this possible!

A touching soul music with a reggae influence. Ben L’Oncle Soul has an amazing soft voice. He is not alone on stage but rather accompanied by numerous band members (9!) among whom two male vocalists. Despite being French the songs he plays are mostly in English. His delicate and beautiful voice makes your soul vibrate whereas the music in the background with the sax and the piano makes you drift away. Lots of love songs to which the audience sings along to, a truly beautiful moment!

Like Ben L’Oncle Soul also Danakil are very numerous on stage, they are 10 in total! Which shows that reggae is a multi-instrumental type of music. They sing both in French and English. Their influences also have some roots in rap and hip-hop. They play a reggae cover of Edith Piaf‘s “Non, Je Ne Regrette Rien” (meaning “No, I regret nothing”) to which all the crowd sings along. For this purpose they change the first verse into “Non, je n’entends rien” (No, I can’t hear anything) pushing the audience to sing louder. The rap influence in their music makes them even more fun! The effective mix of the instruments and the two singers’ voices is rather explosive, the guitars riffs also add a rock touch to it! You can’t stay still!

When I saw Gentleman in 2007 at Openair Gampel I listened to a song and then was bored. I’m not sure what happened in the mean time, if he changed or my tastes did. What is certain is that at Caribana Festival he did a great show and I really enjoyed it! His reggae music is colourful in sounds and its lyrics are thoughtful. He quotes Bob Marley various times underlining the importance of reggae music and music in general to bring people together. He and his band also play a cover.
Through his music he really shows that reggae is also a state of mind. He is great with the public too, talking to it in between the songs. His tunes are nice to groove along to.

On top of the music this concert was rendered even more impressive by a natural effect: thunderstorm! Spectacular lightnings painting the sky like fireworks and pouring rain accompanied the gig, which also left Gentleman and his band speechless and impressed.

Cee-Roo is an unusual sort of producer, he reworks old tunes and turns them into today’s funk hits. An example? The Doors’ “House of the Rising Sun”, Aretha Franklin, Queen and so on. But this is not all, the video footage which accompanies the performance is pretty cool. Black and white videos, retro images, videos of the The Jackson 5 render the gig more interactive and fun. Not to forget, for the happiness of the boys, there are also some girls dancing in a provocative and sexy way.

The two female vocalists and the other musicians enter the stage. Coming down from the stairs placed in the middle of the stage, there he is John Newman, wearing a black and white blazer, he is really classy and elegant. John Newman starts off with one of his party tunes and gets the public into dancing at once. His beautiful nasal voice can drift in every direction and is pretty impressive to hear live! Throughout the concert he asks the public to clap along and cheer. The lad has got the moves, he dances in many of the songs imitating Michael Jackson‘s moves.

He plays some new songs which sound pretty cool and get everybody dancing! Some of his songs have a rock touch which render his soul-electro music a bit more aggressive.
Towards the end of the gig he says he always thanks Rudimental in his shows because they were really important to launch him in the early days of his career.
The gig ends on the party notes of his most famous single “Love Me Again”. For this one, everybody is dancing and singing along as if there was no tomorrow!