Friday is a bit of a mix of styles and bands, from hip hop to songwriting and so on. Great opportunity to experience different music and discover new bands as I privileged the concerts not on the big stage.  I also ventured to La Ruche, the part of Paléo dedicated to the arts and comedy! I saw Les Misstrash there, who offered a cool and interactive concert! 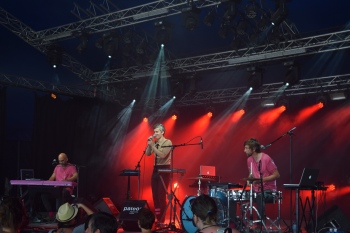 Witty lyrics and pink T-shirts for this band from Yverdon. They play what their singer considers as “saloon punk” the lyrics are rebellious and clash with the music which is more a groovy pop, with piano and synths. Sort of a piano bar music but much cooler! Joined on stage by a friend with a pink T-shirt and a cigarette pack in his hands. He wants to light one but doesn’t because a song telling to stop doing wrong things starts. His response? He throws the cigs on the audience and joins in in singing the song.

Gocoo is composed by many people, mostly girls, with long brown hair and an ancestral Japanese percussion instrument in front of them. What they do is pretty impressive. They go into an hypnotic trip of their own and they drag the public into it with the wild banging on the percussions. Every beat seems a step towards the mystical trip highest point.

Nneka is a Nigerian singer based in Hamburg, she mixes reggae with other styles like folk and hip hop. Her lyrics are touching and thoughtful. She leaves place for intelligent speeches as well about peace and the need for equality in the world, about Boko Haram and the useless killing in the name of religions in Nigeria. The things she says are awfully true and with her music she speaks out the injustices in the world. Her concert is a moment for people to enjoy her music but also for reflection.

Disco Doom play a sort of noisy rock, dirty guitars and such. They’ve been around for quite a while. Their music reminds at times the melancholy present in the rock of Radiohead. They are not really good with entartaining the public but still the music they play is great, with quite a lot of rageous and thoughtful instrumental bits.

For those not familiar with it, 120’’ was a radio programme on Couleur 3, the third channel of the Swiss French radio with Vincent Veillon and Vincent Kucholl. The former plays the moderator whereas the latter plays every time a different character linked to Switzerland and so on. It is great fun and they also made videos which you can find on You Tube. In occasion of Paléo’s 40th birthday they created a special set of 120’’ based around Paléo. Lots of special effects, Swiss singer Bastian Baker comes on stage disguised as an unknown new singer, the two Vincent play some songs with their hard-rock band Black Lion Genocide and there are lots of different sketches. Funny moments, which can be relived through the DVD of the show which will come out in October! 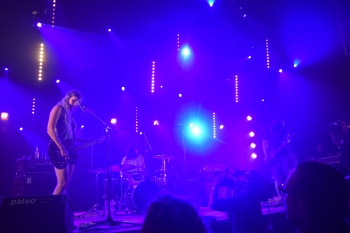 Peter Kernel are a band unlike the others, their music is original and the way their texts are constructed on the music is original too. Defined as art-punk you sort of understand what this means when you see them live. Half from Ticino (singer and guitarist Aris) and half from Canada (singer and bassist Barbara) without forgetting their Mexican drummer, the mix in the nationalities is reflected in a sort in their music. A mix between solid alternative-rock, screams and slow talks. Sexy guitars and bass riffs which make you vibrate and drums beats which make you shake. An explosive combination which leaves a mark! The intertwining of Aris’s voice with Barbara’s sort of sung-speeches coming in and out create a cool atmosphere before they let themselves go in some crazy and great instrumental bits like in the addictive tune “High Fever”. Friendly and joking among each other and with the audience they know how to effectively behave on stage. They came out with their last album Thrill Addict this year, which is even more poetic and surrealist than their previous albums. Certainly a must hear! I had the chance to interview Aris and Barbara during the afternoon and they kindly answered my questions. Stay tuned, the interview will follow shortly!