Here we are to the last day of this 40th edition of Paléo Festival. This week filled with concerts, art, food and people has gone by incredibly fast! Let’s see the acts which made my last day an amazing one!

Olivia Pedroli’s music is describes as folk but I would rather describe it as orchestral folk as she is accompanied by very talented musicians playing cello, xylophone, drums and a grand piano. She has a beautiful voice which can hypnotize the public. “Birds” is her favourite song and she plays it alone on the guitar.

I ventured once again to the Village du Monde to see Shanren, a Chinese rock band. Heavy and addictive guitar riffs, they sing in Chinese. The particularity of this band is that the members also employ instruments from China, like plates and a special mandolin. The guy playing the plates jumps off the stage at one point and runs and jumps among the audience.

I had never seen a classical music concert live so this was a first for me! And seeing it at Paléo was nice, for a change it´s pretty cool to see something completely different than usual on the Grande Scène! Arches and oboes, and a young talent, Louis Schwizgebel, playing the piano incredibly well, the Orchestre des Continents is directed by Thierry Fischer. They play oeuvres taken from Serge Prokofiev and Serge Rachmaninov.

Yael Naim is an Israeli born singer based in France, she has an amazing voice and sings with passion. She says that this year she lost her mum and her first baby was born therefore she experienced the death of someone really close for the first time bu at the same time she experienced life. She put this double experience into words and music on her last album. She plays a slowed down cool cover of “Toxic” by Britney Spears.

Kev Adams is a 24 year old French comedian. I had never seen any of his shows nor life nor in TV but I really enjoyed his show. Some of his jokes and grimaces reminded me of Gad Elmaleh, a more famous French comedian who surpise surprise joined Kev Adams on stage!! Funny moments 🙂

Before David Guetta takes the stage it’s time for the usual fireworks. A bang starts and everybody gives the back to the Grande Scène as the sky is lit up with colourful and beautiful fireworks. What makes the fireworks at Paléo so special is also that they are accompanied by a very special soundtrack featuring some of the artists who played at the festival such as Robbie Williams’ “Angels” and Kings Of Leon’s “Sex On Fire”, the audience transforms itself into a choir.

From the high of his huge cubic console station David Guetta towers the stage and the audience! That’s the altar where he mixes the plates on the turntables and “plays” with the buttons. There is a big screen on the cube as well as in the backround of the stage where video footage and live reprises are shown. There are some pretty cool special effects and different types of light-effects. David Guetta goes through his long list of collaborations and remix for other artists. He plays songs by Bastille, John Newman’s “Blame It On The Night”, John Legend’s “All Of Me”, fast and furious, … He doesn’t sing he just remixes but he knows how to entertain the public he screams in between songs and such. He ends his show with the old but evergreen “Memories” and with “Sexy Bitch”.

So here’s the end of the 40th edition of Paléo Festival, a colourful and really fun one which hosted 270’000 visitors, 170 artists and troupes without forgetting the 5000 volunteers without whom the festival wouldn’t even be possible!
From my side I had lots of fun, saw many new artists and discovered new bands which will enrich my playlist. I explored the Village du Monde travelling through culture, music and food in the Far East. This Paléo was filled with laughter too, thanks to the many artists and comedians present. And of course big thanks to Paléo and it’s awesome organizers and crew for giving us once again the chance to cover this amazing festival! 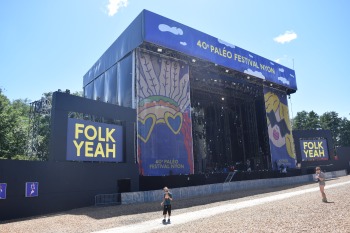 The appointment with the 41st Paléo Festival is from the 19th July to the 24th July 2016! Don’t miss it, because the organizers will come up with as many cool things as in 2015. The theme of the Village du Monde will be the Celtic lands, ranging from Galicia to Ireland. So, better not miss it, as it promises to be filled with lots of great folk music, nice food … and drinks!