Owen Pallet is a multi-instrumentist but the instrument he knows better is the violin. There is a sort of fusion between himself and his violin when he plays it. On stage he has a special pedal for his violin and he also create sounds from the computer. He is also accompanied by two musicians. When he sings he unveils a very original voice. He breaks the water by doing a joke that not many people understand. He comes out for an encore on his own and asks the audience what they want to hear and the answer is a happy song, so there you go he plays a happy song on his violin to make the audience… happy!

Fai Baba is a band from Zürich which was born in the wrong era. Their music takes you back to the 80s with some very moving and sexy riffs. They play many well-thought instrumental bits. The singer also plays a guitar with 12 strings, as to intensify the sound of the riffs. His voice is charming and well you can’t really keep your eyes off him either. 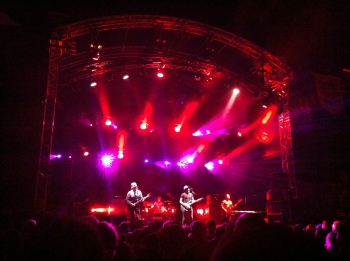 The British band Ride is one of the most awaited acts at this years’ For Noise. Their music is cool, it is a rock easy to listen too and the combination of riffs and drums is really effective. As they play the lights are blinding. They are good with the public and the music is really entertaining even if I am not familiar with it, so that’s a good sign! There are some old school fans present at the gig as well as the band questions itself when they last played in Switzerland.

It’s just a man and his guitar, fused into one thing. There’s a loop of electronic sounds in the background and then he aggressively plays the guitar on it. He screams here and then on top of the sounds, the result is almost hypnotic! I believe his music could be considered as a sort of art punk.