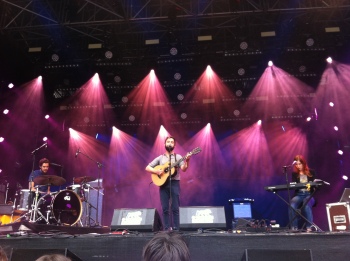 Villagers open this folk night at Winterthurer Musikfestwochen, which also happen to be the last night of this festival, in the beautiful square of Steinberggasse. This square, although smaller in size, reminds me of the Piazza Grande in Locarno, Ticino with its colourful houses surrounding it and people looking down from the windows and balconies.
Villagers is Irish singer songwriter Conor O’Brien, with whom I had a fun chat in the afternoon, accompanied by his drummer and a girl on keyboards. 1st set the tiger free. He plays “Courage” and he dedicates to the people on the windows. The lyrics in his songs get straight to the point and are often dark and sad. His music gets right to the heart of the listener and on stage he is passionate. He starts picking the strings of his acoustic guitar with his eyes closed and reopens them as he starts singing. He plays a song about prostitution as well “Hot Scary Summer”, a song about a love that finished. The great song “Nothing arrived” is done in a slower pace and sounds more acoustic than on the album! A great first folk act for the evening!

Fink is on stage with his band composed by four musicians: two guitarists, drummer who also plays the guitar sometimes and a keyboarder (piano). They actually came out beforehand doing the soundcheck and getting the stage ready themselves, pretty cool I think! The first song he and his band play is a rather instrumental one, broken here an there by a few lyrics. At the end of it, with a smile, Fink claps his hands saying “Now we’re awake.” The band looks as if this first song did what had to do: put everyone in the mood!
The songs they play are well-thought, touching and the break in between the lyrics sets the audience into a sort of trance. The alternation of riffs and instrumental bits with the sung parts is truly effective. It’s in a sort an experimental folk, testing the boundaries and it does it well! Aggressive at times, more quiet at others it keeps the audience in awe. When Fink plays the beginning chords of his most famous song “Looking Too Closely” the audience screams! Clapping, he cheers for Villagers and for keeping away the rain and says Ben Howard is gonna make us all cry and will make the sky cry too. The former is certain the second hopefully not!

There’s no 2 without 3… so here I am once again to see Ben Howard. On stage with him there are seven musicians, including the faithful India Bourne on the cello and bass guitar and Chris Bond. Plus a trumpet, two guitarists and a pianist who swap at times.

Ben Howard sits on a comfy stool and plays the first song “Small Things” taken from his last album I Forget Where We Were (2014), a few notes are enough to feel that he is absolutely incredible as usual. He is really into it, closing his eyes, moving his body as if transported by the music. He looks as if he is in another world and the way he is into it is moving, he really gives all himself on stage! He mostly plays songs from his last album but also older songs from his first album Every Kingdom (2011), like “Keep Your Head Up” and from his EPs. He slows down and changes the rhythm of one of the old songs “The Fear”, rendering it an entire new experience for the listener.

Towards the end of the gig he sits down once again and starts playing those strings, yeah those strings which somehow are the key to enter your soul and tear apart your heart. The strings of “End Of The Affair”. And when he starts singing the world crumbles, and it is just you and him on a bubble. Tears may run down your cheeks as he plays this song as it is so powerful, both the song itself and the passionate way he and his band play it. At the end of it you are left breathless and then they all leave.

They come back thanking the audience for the support and for coming to see them. Ben Howard says “We’ll remember this gig for a long time because we won’t be touring again for a while!”. Don’t worry, the audience will remember this gig for a long while too, it left a mark. They play “Esmeralda” as the last one, which is taken from The Burgh Island EP. As if they hadn’t given enough with the previous songs they loose themselves into the riffs and powerful sounds and make the audience wander into this aside world! What a stunning journey into the secret meanders of folk!

Thank you to Winterthurer Musikfestwochen for inviting these three brilliant artists for this great folk night. And thank you to Villagers, Fink, Ben Howard and their respective bands for the emotions and the memories 🙂