On Saturday there was also the Street Parade, a parade in the centre of Zürich accompanied by craziness and electro and techno music. Many people went there in the afternoon so that there were not many people at the Openair, a pity since the bands were really cool! I opted to go to the Openair, of course, to close the last big Summer festival in Switzerland from beginning to end 😉

My Name Is George is a band from Zürich. They play a catchy rock with a line of rock ‘n’ roll which is really danceable. Although the audience is not very numerous it still participates greatly. The singer dedicates a song to his little kids who see him playing for the first time. Another great Swiss band to follow!

Here’s another Swiss band but from Graubunden this time! From Kid unveil a beautiful indie-rock sound with a soul. The singer’s voice is pretty amazing and the music they play steals your heart, not to be missed!

The Australian band Pond sets fire to the Tent Stage with its cool indie-rock mixed with psychedelic sounds in the line of their co-nationals Tame Impala, with which they actually share three members. The four young guys play guitars, keyboard, drums and bass guitar. Really friendly with the audience they make some jokes and stuff. The singer says that in Australia when people think about Switzerland it is as a land covered in snow and asks how it can be so warm here. Because, yeah, there were like 30 degrees but they should be used to it coming from Australia… Funny times! 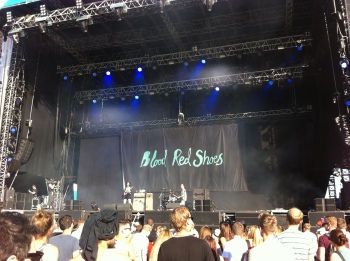 It’s evening but the sun is not setting yet and it is still incredibly hot. On stage it is even hotter as lead singer and guitarist Laura-Mary Carter and drummer Steven Ansell who together form Blood Red Shoes start playing. Their music is aggressive, but don’t get me wrong, it’s aggressive in a good way! They both give everything, Steven banging hard on his drums creating a rumbling sound and Laura-Mary playing cool chords on the guitar and singing. Also Steven sings in some songs, mostly doing the back vocals or in the songs where they scream. They are also great in motivating the audience, even in the heat they set the stage on fire!

I wonder from where the British band Jungle took its name. Is it because they take the listener into a jungle of sounds or is it because they jungle between many instruments? Anyhow live they are great, multi-instrumental and mixing electronic music with real instruments like guitars, maracas, … An intertwining of rock with electronic stuff and also a bit of world influence. Glad I could catch them here since at For Noise I missed their set because of the interviews I had.

In the line of Jungle, Hot Chip also mix in a sort rock with electro stuff. Less focused on world influences though. They make the Tent Stage dance like crazy to their electronic music. 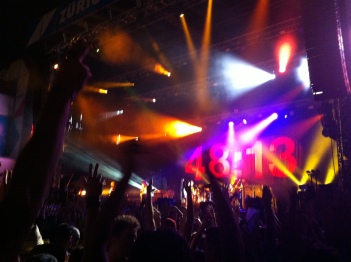 Kasabian are definitely a night band, when I saw them at Roskilde last year they were playing on Sunday afternoon and it wasn’t a good idea, neither for them nor for the audience. But here in Zürich, at night, they put on a great show! They play most of their famous songs like “Underdog” and “Shoot The Runner” to which the audience sings along.
Serge Pizzorno comes down the stage and shakes the fans’ hands twice, in the middle of the show and at the very end! While singer Tom Meighan sits in front of the drums his legs crossed waiting for the audience to sing, and it does work! Their newer songs taken from their album 48:13 (2014) have an electro imprint more than their previous songs. But the mix between indie-rock and electronic sounds is effective! I’m still waiting to hear “Goodbye Kiss” live but they’ll probably never play it at a festival as it’s a slow song… 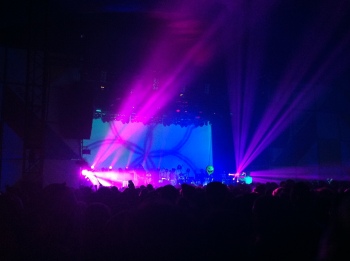 Colourful psychedelic videos, sort of as if you are under the influence, are the faithful companion of a Tame Impala gig. They lead the listener through the psycho trip along with the space sounds the band produces. Tame Impala play many instrumental bits, reaching the climax with a beautiful confusion of sounds as colourful as the videos on screen. Even when the voice of the singer is present its tone and everything make all seem from an outer world. The singer asks the public to help them sing a song, it’s the awesome “Elephant” with its addictive rumbling rhythm from beginning to end. And well when they play “Feels Like Going Backwards” you just remain speechless for its supreme beauty, wow!

Paul Kalkbrenner produces electronic music which is at the same time so chill and laid back you could well be on a hammock and having a nap while listening to it. The beats are not to hard, they are low on tune and a bit dark perhaps. There are almost no words, which perhaps makes the mind drift on its own more freely than with the boundaries of words.

An entire different show than Paul Kalkbrenner, Skrillex puts a lot of effort on the scenography: smoke cannons in front of the stage, colourful video footage and such. And according to himself, well he can’t seem to stay still for a minute as he jumps from the high of his cubic console. The American DJ mixes famous songs by Rihanna, Sam Smith and so on turning them into dub step tunes cool and fun to dance along to.

Merci vielmal Zürich Openair, I’ve loved these four indie-electro days. Saw some of my favourite bands, discovered some really good new ones, did many new interviews, I danced until my legs hurt and sung until I had no voice! This also goes down in history as one of the sunniest and hottest (in all senses) festivals I’ve ever been to! Thank you for the good memories, those will never die 🙂