As I approach La Cave du Bleu Lezard, there’s a really long line, hardly ever seen it! the reason why is the first night of the Holy Groove Festival and the blues artists playing tonight are pretty awesome: The Two and Martin Harley.

The Two are Yannick Nannette, a Mauritian guy with impressively long dreadlocks, and Thierry Jaccard, a Swiss guy who no matter how hot it is outside always wears a beanie hat. Their secret is playing blues music with their sincere smiles, rendering the audience happy.

Yannick forgot his guitar belt so Thierry is left on his own to start the set which he does by playing some blues strings on his guitar. When Yannick comes back he gets back in place very calmly so that Thierry has to play some more on his own. The other half of The Two then joins in with the beautiful sound of the mouth harmonica!
The Two are just incredible live, their blues music gets deep into your soul and even in your bones as the song “In my bones” speaks out. This time for the Holy Groove Festival they heighten even more their blues side, concentrating on blues guitars and instrumental bits as well as on vocalizes. They are super friendly and besides the fact that they are really talented that’s the other key of their success. Down to earth they joke with the public, tell anecdotes and so on. They also tell about their experience this Summer saying that it was incredible and that they’ve played in so many places. And that’s where they got to meet Martin Harley. They both announce that we don’t know what expect us with Martin Harley and that he is very talented.

Thinking back about the origins of their band they say that the first concert they played together was at Holy Groove festival when they weren’t even called The Two. As they forgot an instrument Yannick mimics its sound with his original and powerful voice. It’s a voice which gives you goose bumps for sure, a bit hoarse at times but so powerful. And it fits perfectly with their music. Blues guitars are intertwined with the harmonica as the lyrics flow. The audience joins in clapping and singing along. The last song they play is one in the Mauritian language, where Yannick comes from, most of us don’t understand the words but the sound of them combined with the music create a stunning atmosphere.

The Two is a band you won’t forget! They play with passion and with a constant smile, you can actually feel their happiness while they play, they will only get bigger because they really deserve it. It’s a pleasure to see that there are really talented Swiss bands and they, well I won’t deny it they’re definitely one of my new favourites! 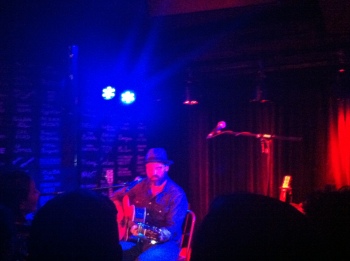 Martin Harley mostly plays his blues guitar by having it on his laps! With special plectrums which intensify its sound, from vibrato to straight minded picking of the chords. And then there’s his voice which beautifully comes in, so pure, so loud that you wish he’d never stop singing. One of those voices which cuddle you and at the same time are so full of energy. It’s quite impressive to see and well the sound is truly amazing. Juggling between sad and happy songs he makes the audience travel through different places in which blues is the king.

Martin Harley presents himself saying “I come from down down South … of London” at which the audience laughs. For one of the songs he takes out his 87 years old guitar called Rosie, commenting that he never has such an old lady on his lap, it’s impossible not to love his British humour.

Martin Harley jams together with The Two for the last half hour of the concert. He is first joined by Yannick who plays the harmonica with a great passion and then also by Thierry on the guitar.
Towards the end Yannick plays the harmonica and makes vocalizes responding to the sounds Martin Harley plays on the guitar.  He ends the gig with a cover of the song “Chocolate Jesus” by Tom Waits.

Lots of creativeness and improvisation in their music make these artists amazing. And most of all they play with a smile and that is so contagious. Thank you to them for this great trip into the touching meanders of the blues world!