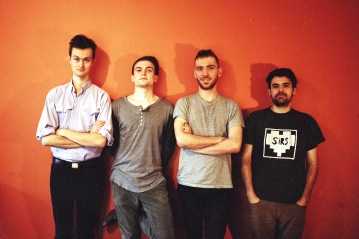 I attended the first day of For Noise Festival, in Lausanne-Pully on August 20 and there I saw the Canadian indie-rock/post-punk band Ought for the first time. They were awesome live and I really got into them and their gig. Eline Müller of Irascible Music spotted me in the crowd and asked me whether I wanted to interview them and I said “Yes, of course!”. So thanks to her for improvising the interview and thanks to Ought, of course, a bit shy at first then breaking the cocoon nut. Ought are Tim Darcy (guitars, vocals), Matt May (keyboards), Ben Stidworthy (bass) and Tim Keen (drums, violin).

The Liberation: So I just saw you playing before and I was stunned because it was so powerful and so cool. It was the first time I saw you so I was really impressed let’s say. I wanted to know if you consider your music as accessible to people since it’s a bit experimental but at other times it’s more indie-rock and so on. So what do you think about it? Is it easy for people to like it?

The Liberation: Ok, thanks. You’re signed to Constellation, which is a prestigious label from Montreal. Did this help promoting your music and your success?

The Liberation: OK. And do you feel a sort of pressure because you’re signed to such a prestigious label with many other big artists?

The Liberation: So you have the freedom to be yourselves.

The Liberation: That’s cool! Which bands influence your music the most?

There is some music coming from the Mini Mansions set, “Jesus what bass!” (all laugh).

The Liberation: In which way is the Canadian public different than the one in Europe for example?

The Liberation: Can you unveil a bit how your upcoming album is going to be?

The Liberation: So do you feel you’ve grown with this new album?

The Liberation: That’s interesting! How does your composition process work? Do the lyrics or the music come first?

The Liberation: OK perfect! I’m done thanks a lot for your time! 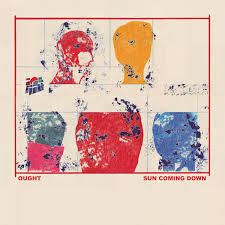