As I approach Les Docks there are quite many people standing in line to enter the venue. Editors are playing tonight and we’re all very excited! Let’s see how Editors and their support band The Fawn treated the audience!

The Fawn are formed by nonetheless than seven guys, 3 guitarists, a bassist, a drummer, a guy on synths and electronic drums and the singer. The singer doesn’t play any instrument and moves concentrated to the sounds, almost voodoo-like! They start off with an instrumental intro with a repetitive electronic sound almost like a screeching noise, quite weird than the guitars come in (3!). One of the guitarists, Jona Nido, also plays in a great band called Closet Disco Queen that I discovered at the Rock Cave of Montreux Jazz Festival this summer!

Not everybody’s cup of tea, which is sadly heard because of people talking…  Not much is sung, the first song is in French whereas the other ones are in English. However, most of the music is instrumental ranging between post-rock and progressive rock, with repetitive sounds going on for like 10min and which become truly addictive.

They present “Branches” a pretty slow song in which all of a sudden the guitars burst out and do their on show, probably waking up who was already asleep. The constant drums and synth sounds in the background don’t change but nevertheless the sound seems to change because of the guitars and bass chords playing over them.
Disturbingly beautiful and we absolutely love that! Check them out!

Editors are accompanied by guitarist Nick Willis who replaces their original guitarist who just became dad. They kick off the gig with some synth sounds to introduce the first song “No Harm”, taken from their new album In Dream, characterized by falsettos and great vocalizes. Tom Smith’s baritone voice is even more impressive live and proves that he can very well sing also in falsettos juggling with his voice. He has something of a dandy on stage with his moves and such.

On with the sombre “Sugar” rendered more delicate with the piano notes. When the first notes of “All Sparks” resound in the venue, the audience screams. The rhythm changes a bit from the album, it is really beautiful and very much acclaimed by the fans who sing along. During the song Tom Smith pauses from singing to present the rest of the band.

The band leave the stage, living singer Tom Smith alone with his acoustic guitar, he delights the public playing an acoustic version of  “Smokers Outside The Hospital Doors”. The venue is completely silent there’s only him singing passionately with his powerful and sexy baritone voice, incredible!

The rest of the band comes back on stage and continue with “Bricks and Mortar”, with its repetitive synth base in the background.  The lights go really well with the music. There are some sort of light panels in the back of the stage which light up differently every time, creating at times a sombre atmosphere and at other times a colourful one.

Editors’ sounds despite being dark are multi instrumental bringing in bells, piano as well as electronic sounds. They adapt to the changing world of music and to the digital era, with the use of synthesizers and electronic drums, in order to give a touch of electronic music to their alternative rock sound. Basically all members are multi instrumentals swapping among piano, synth, guitar and keyboards.

There we are, they end the first part of the gig with the amazing “Munich”, one of their battle horses, with which Les Docks trembles and goes crazy! The fans singing along and jumping. For some reason, towards the end of the gig the fans start jumping and such.

Editors leave the stage and after a few minutes filled by the fans keeping on clapping along and screaming for them to come back, they do come back for an encore.

They play another new song “Ocean Of Night” and for “Papillon”, we’re brought back to their 2009 album In This Light And On This Evening and Les Docks transforms itself in a dance club. The synthesizers and electro sounds are heightened, as are the lights, the audience jumps and claps along to the engaging rhythm.

Editors close their brilliant set, thanking the audience for coming down to spend the Friday night with them, with “Marching Orders” yet another new song. It is perhaps unusual to end the gig with a new song rather than an old one but the audience appreciated 😉 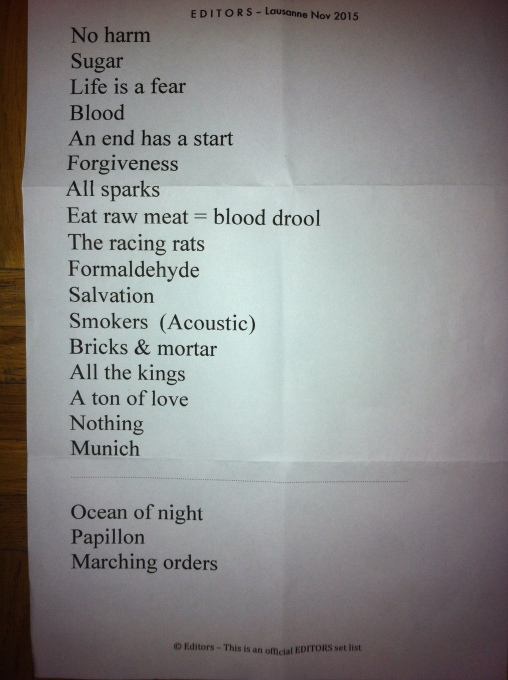