If I had to define with an adjective Florence + The Machine gig at Hallenstadion in Zurich I would say “happy”. Happy because singer Florence Welch, with that contagious smile makes the mirror neurons of the audience imitate her and smile back to her, and because she sort of hypnotizes you. Quite powerful right? Let’s see how it was! 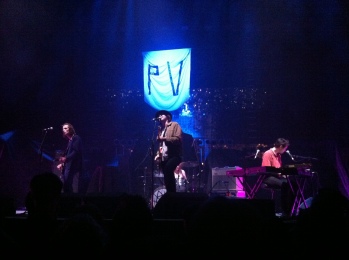 Palma Violets are a young British band, they play a sort of underground indie-rock passing through punk-rock. Heavy riffs and drums beats render them dirtier and more rock than Florence + The Machine.
Too bad the sound is not very good, not the band’s fault of course. Despite that. the band is quite entertaining, with mainly the bassist animating the show and creating a link to the audience. Perhaps instead of just a white flag with the initials “PV” they could have written their entire name, many people had no idea who they were.

Florence Welch is dressed in her beloved 60’s style, pearl white trousers a light blue shirt and a pearl white gilet and she’s barefoot! She’s free as a bird, ethereal, as she defines herself. She fluctuates on stage and it is such a pleasure to see her do that.

The Machine is composed by nonetheless than 11 people 2 vocalists, three female trumpeters, a harpist, a guitarist, a bassist, two pianists and a drummer. You can only imagine the sound they make, it’s like an orchestra. The stage is all glittery and shiny, the back of it is covered with square paillettes reflecting the light of the spots in front and creating a glam atmosphere!

They open the dances with “What The Water Gave me” and straight away the listener is taken into another world, hypnotized by Florence’s voice and by the orchestra playing behind her. The songs of the new album How Big, How Blue, How Beautiful (2015) are great, they play the truly engaging “Ship To Wreck”, where Florence incites the audience to sing along and jump.
After a few songs Florence asks the people sitting to get up and they do, dancing and joining the standing people in the fun.

The orchestra behind renders the songs majestic, as do the vocalists. But Florence’s voice doesn’t go unnoticed, it is powerful and magnetic! “Put away your phones for this one please, I want you to feel this!”, Florence Welch wants the public to just share the music and the love. She explains that she wrote “Cosmic Love” when she was hangover and claims that “you don’t have to look to deep into the lyrics”.
She wrote it at Crystal Palace, the same place in which she wrote “Dog Days Are Over”. “I’m glad this song made it here” and then they play an acoustic version of “Cosmic Love” with harp, guitar and piano on the background. It is touching and the rhythm changes a bit from the album and renders it even more special.

Throughout the gig Florence runs around the stage, jumps and even runs to the seats on the side of the Hallenstadion singing from there. I asked myself how she can hold her voice when running around and stuff! In the new album How Big, How Blue, How Beautiful Florence’s voice is more powerful than ever and live it is the same. I saw them in 2010 at Gurtenfestival in Bern, and it was nowhere near this! Sometimes the fans do not even dare singing along to her high pitched vocalizes but Florence instigates the audience to sing along.

“You’ve Got The Love” is one of the oldest songs and the one which made Florence + The Machine famous! Florence makes the shape of a heart with her hands and the audience imitates her, singing along!
She thanks the audience with a huge smile and even clapping for the singing along and such. She is truly amazing and super engaging! For “Shake It Out” she makes the audience sing, everybody is having fun. For “What Kind Of Man” Florence gets off the stage and goes at the centre, in front of the audience putting her head close to the head of a guy in first row and singing stuck to him with the fans behind screaming with excitement (and a bit of jealousy too…). Then she gets back on stage and asks: “Do you want to dance with us?” before they intone “Spectrum” and the audience starts dancing and jumping.

Here it is, it’s that moment: they play those beautiful notes on the harp for “Dog Days Are Over” the audience, in awe, dares to sing along now and jump and join Florence in her ethereal trip! The fans follow the clapping of the vocalists to create the background rhythm for the song. It is the last song before the encore, they leave the stage and come back a few minutes later highly and loudly acclaimed.

They play the new song “Mother” , leaving the audience for good with an old one: the lively “Drumming Song”, which as it’s name suggests contains loud drums beats.

Florence said to the audience “You make me feel grounded”, and I’d add that she made us all feel ethereal. We bring her down to earth, she takes us into her world up there, what a beautiful and mutual exchange this is. Thank you Florence + The Machine for making us enter a music world which makes us bid goodbye with a huge smile, bigger than when we entered it, and shiny eyes 🙂

What The Water Gave Me
Ship To Wreck
Bird Song Intro
Rabbit Heart (Raise It Up)
Third Eye
Delilah
You’ve Got The Love
How Big, How Blue, How Beautiful
Shake It Out
Cosmic Love
Long & Lost
What Kind Of Man
Spectrum
Dog Day Are Over
Mother (encore)
Drumming Song (encore)