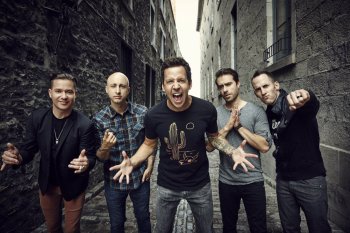 Simple Plan are one of the bands that along with Green Day and Good Charlotte brought punk-rock out from the underground and out in the world at the end of the 90s and the beginning of the 2000s. You will certainly remember some of their songs like “Welcome to my Life” and “Jump”.

Simple Plan evolved and revolved, parting from the punk-rock that founded them and going towards a more pop-punk style , at some point I think they even dropped the punk in favour of features with other stars like the song “Jet Lag” or “Summer Paradise”. Perhaps they lost a bit of their rebellious side becoming more commercial than before and changing the type of music or perhaps it’s because I’ve grown and I don’t see them the same way as I did before.

The five French-Canadian guys are back on the road with their fifth album Taking One For the Team, released on the 19th February 2016 and preceded by the single “Boom” which could well have been taken from one of their first albums, so are they back in their more punk-rock mode?

I guess we’ll see at their gig, a jump back in my teenage years to listen to one of the bands that represented my soundtrack (and much more than that) back in the days. I’ve seen them three times before, always in Zürich, I remember complaining of not seeing them in the French part of Switzerland, but here they are eventually…