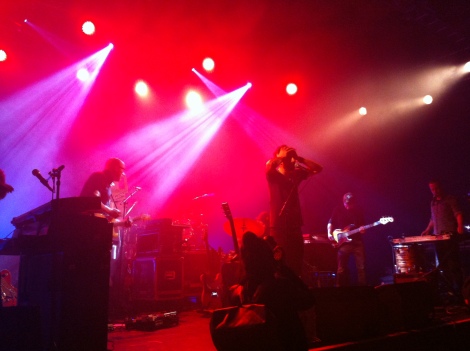 Abu is an artist from Bern. On stage is accompanied by his band which plays multiple instruments. Abu has a great and powerful voice. He and his band play rock with a soul, mixing riffs with keyboards and some electronic sound, like in the powerful song “Gimme”. Definitely an interesting artist to keep an eye on! 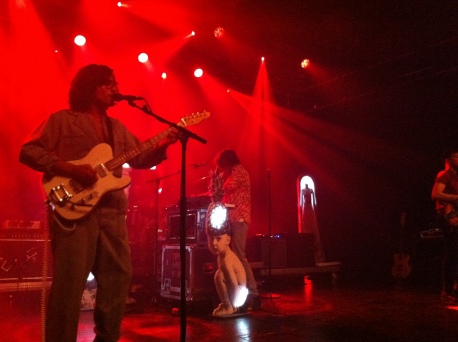 The stage is set up with weird mannequins lighting up during songs, reflecting the dose of psychedelia present in their last album Amen & Goodbye.

The band’s songs contain many oriental and arabesque rhythms, which make the audience swing and travel far away through time and space. Vocalist Anand Wilder sings in some of the songs, he has an incredibly melodic way of singing and is guitar has a magic sound. Lead singer Chris Keating sings more in a rapping style. Yeasayer’s music is rendered colourful by the many harmonies and the multi instrumental background.

There’s also space for synthesizers and electronic sounds adding up to the other space sounds created. The band takes the audience through its repertoire playing older songs like “Sunrise”, the first song Yeasayer ever wrote, to songs taken from the last album like the single “I am chemistry” in which the lyrics reach the edge of psychedelia as the multi-ethnic sounds set in.

Towards the end of the concert the bassist kneels down and hugs one of the girls in front who was dancing from beginning to end, the audience clapping along.