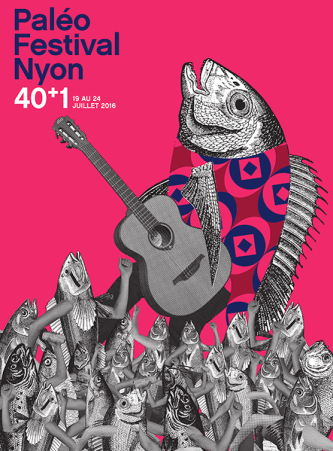 The 40+1 edition of Paléo Festival Nyon starts on Tuesday 19th July 2016 with none other than Muse to inflame the Grande scène! It’s the third stop in Switzerland this Summer for Muse after Montreux Jazz Festival and Gurtenfestival. Although the English trio is the main attraction of the Tuesday let’s not forget all the other bands playing on this rock day, like The Lumineers and Courtney Barnett.

Wednesday 20th July is dedicated more to metal and hard rock with Iron Maiden who promise to make the big stage tremble under heavy riffs and powerful drums. Thursday 21st July takes a pop turn with Hyphen Hyphen and a the Swiss folk sensation The Two. Bastille hits Paléo for the very first time on Friday 22nd July, an event not to miss also because the band will play songs from the new album Wild World set to be released on September 9th. Saturday 23rd July paints itself in the colours of electro with the highlight of The Chemical Brothers. Sunday 24th July hosts many French artists like Michel Polnareff and Louane.

But it’s not over: prepare your kilts and bagpipes because the Village du monde this year is Celtic! It brings you all the best of Celtic culture from Scotland to Galicia passing through Brittany and Ireland. From music to food, you can taste a great Irish beer while watching typical folk dancers.

Take the time to enjoy Paléo to the fullest by paying a visit to La Ruche (The Hive) and its street theatre and circus art, as well as all the food stalls and installations present on the festival to widen your experience of it.

Looking forward to this 40+1 edition of Paléo, as a way to relive its 40th anniversary!