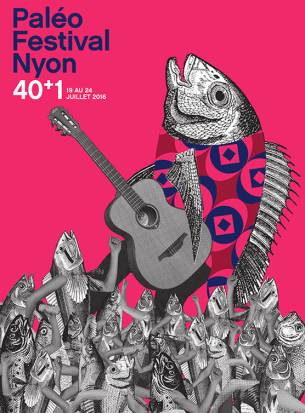 On day 4 I decided once again to go and discover bands I had never seen before, except the arrival of Bastille at Paléo which was unmissable!

A tall guy with blondish mid-length hair, wearing a pair of wayfarer glasses and a leather jacket. Here’s French artist Rover, whose real name is Timothée Régnier, his entry is preceded by his bandmates: drummer, bassist and guitarist.

Rover‘s powerful voice intertwines itself with the guitar riffs creating a music which engages the public straight away with its catchy rock rhythms. Ranging between indie-rock and pop the effect is explosive! A great talent and a great discovery!

Great folk melodies taken from Scotland, Brittany and other Celtic countries. The Celtic Social Club makes the audience dance and jump to the multi-instrumental sounds.

From folk ballads to more lively songs, the Celtic effect is granted. Another trip into the fascinating sounds of this years’ Village du Monde.

Bastille, for the first time at Paléo, delivers a colourful set full of lights and videos! The band presents songs from the upcoming album Wild World, set to be released on September 9, such as the single “Good Grief”, a tune which is set to become an highlight! The songs of the new album sound as entertaining as those on the previous one. They make the audience jump and sing along. One of the best and most lively is “Snakes”!

I’ve seen Bastille many times, and each time is a super show! The guys are fun and really good with the audience, interactive and thankful. Bastille ends the concert with “Pompeii”, the song that made the band famous, and a great sing along follows.

Danceperados of Ireland takes the audience into a journey at the discovery of Irish history, tradition, music and dancing. The band is formed by musicians and dancers, the former also tell the story of the Irish travelers.

The female dancers wear sparkly tops whereas the guys are smartly dressed. While dancing they throw their legs into the air and do some other artistic moves. Impressive!

Téléphone is a French rock ‘n’ roll band which was founded 40 years ago just like our dear Paléo Festival! For the occasion the three historic band members, Jean-Louis Aubert, Louis Bertignac et Richard Kolinka, reunite under the name “Les Insus“.

The band hasn’t lost its charisma despite 40 years have gone by! They are still rockin’ like in the past. The songs are in French and the sounds are catchy! The audience responds with screams and jumps!