This Swiss band takes the audience through an extended range of pop vibes, with powerful piano notes. Al Pride presents the third album Hallavara, which was released in March 2016.

The band is formed by five members, including a female singer and two male singers. The three intercalate themselves in the songs rendering the music colourful and with different tonalities. Al Pride sets a laid-back and surfin’ atmosphere on the main stage. 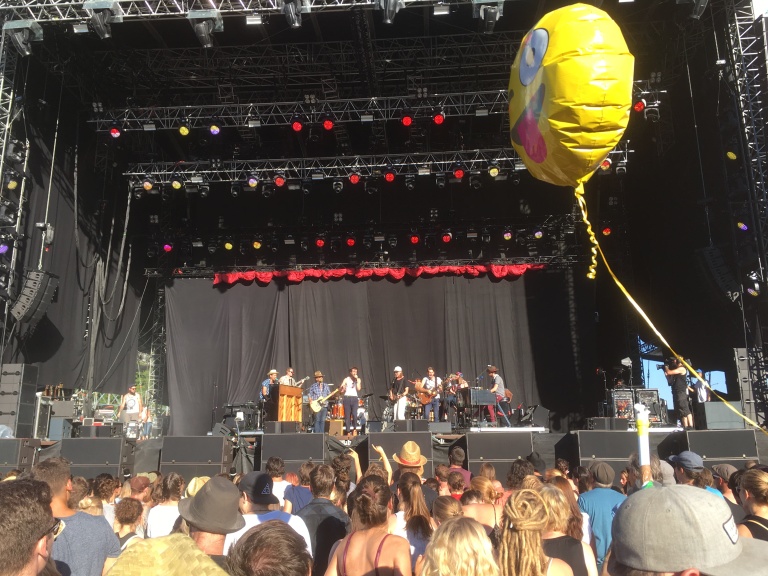 Singer Alex Ebert is a proper entertainer, he spreads happiness among the audience. The Californian band plays an indie-folk peppered with funk and sunny jazz. With a total of ten members on stage, the band literally enchants the audience. The raucous voice of the singer is powerful and is set in between Paolo Nutini and The Lumineers’ as is the style.

At some point the singer jumps off the stage and joins the audience taking a sip of beer from one guy and dancing with another one. Edward Sharpe and The Magnetic Zeros creates some great vibes! Alex Ebet also lets a guy sing one bit of a song and gets everybody to sing along to the band’s 2009 hit song “Home”.

At the end of the gig the singer asks the audience to tell a story and some people up front tell their stories of friendship and love for the band!

I saw Amy MacDonald and her band play in the beginning of June at Caribana Festival. She’s always super friendly and nice with her fans andmanages to create a great atmosphere with her folk rock tunes peppered with her powerful voice.

The highlights? The sing along to “Slow It Down” and the unmissable one that everybody knows: “This Is The Life”.

Jack Garratt is a solo artist, on stage he is accompanied by nothing but his instruments: a synthesizer, drums and guitar. What he can do is quite incredible! He mixes electronic sounds with guitar riffs, all of this topped with his beautiful and high-pitched voice.

He covers Justin Timberlake and Craig David, messing around with their songs and giving to them a contemporary turn. An encompassing artist who is getting big!

I gave The Chemical Brothers a second chance and they didn’t disappoint me as the bit I saw at Paléo Festival Nyon turned out to be the most creepy in the show. On the visual side of the show they are certainly masters, combining for example video footage of two guys rollerblading with a lot of animated videos of different sorts and styles.

The combination of videos, lights and electronic music makes the audience go into a sort of trance. But I guess that’s the desired effect, right?

The stage for Sigur Rós is set up like for the show at Montreux Jazz Festival, but is a bit smaller in size and the set lasts 1 hour instead of two. So it is half the treat of what I had in Montreux. Still the band manages to make an hour definitely worth seeing the gig.

Sigur Rós hide behind the black grid as the first beautiful notes start hailing in the air. The band takes the audience through a visual and phonic trip through Icelandic musical landscapes. With the singer rigorously singing in Icelandic, a fascinating language, full of mystery. His voice is stunningly high and powerful, and the way he plays the guitar as if it were a violin is remarkable.

Sigur Rós are magic artists allowing the audience to leave the world for an hour and travel far with the mind.