Salle Métropole is very crowded for this Sum 41 sold out show! But since the doors opened at 6.30pm there is still some time to wait for the headliners. The opening band Pærish makes the wait smoother.

Pærish is a French rock band made of four guys. The band is pretty young they released their first album Semi Finalists in 2016. Their melodic alternative rock is colourful and although some of the riffs are hard the voice of the singer, which is rather high, adds melody to their music. Heavy drums and fast riffs give the band a touch of punk-rock.

The singer tells a nice anecdote to the audience, 14 years ago two of the band members went to their first concert and saw none other than… Sum 41! You can imagine the band’s happiness in supporting them for a month on tour! And it’s for sure well-deserved!

The colourful lights shine on the white sheet which hides the stage. At one point someone starts playing the drums and then four human shadows come on stage. The curtain falls unveiling Sum 41 behind it, the screaming audience welcomes the band. The guys start rocking straight away with singer Deryck Whibley calling up a few people on stage, they will watch the entire concert from a privileged position on the left side of the stage!

The five Canadian guys are in perfect shape and offer the audience an amazing gig! Throughout the show they take the chance to play some new stuff taken from their last album 13 Voices like “Fake my own death” and “War”. Deryck Whibley dedicates the latter one to all Sum 41 fans who helped him overcome tough times. A touching message for the fans, showing them that the band needs them just as much as they need the band’s music.

The old songs are the ones which gather more people in the singing along and in the jumping around! The singer tells the audience straight away to create a mosh pit circle in front and that’s it… a gig patterned by a metal moment, more punk-rock ones and a few slower moments.

The concert unwinds among special effects like confettis thrown in the air during some songs, balloons coming out during “Underclass” and smoke coming up from the stage.

In the middle of the song “Makes No Difference” the security people come and make a path in the public to allow singer Deryck Whibley, who is escorted by four security men, to reach the smaller stage behind. From there he says hi to the people sitting on the top and the people behind. Then he makes the audience sing the refrain of “Makes No Difference”. He then sings another old song, “With Me” one of the seemingly slowest and sweetest songs by Sum 41 which then bursts in all its energy with guitar riffs and drums in the refrain. It’s an intimate moment, with the public joining in in the singing and waving arms to the rhythm of the tune.

Back on the main stage it’s time for some sweaty punk-rock fun again! Space is left for the drummer to show off his amazing skills while the rest of the band leaves the stage. 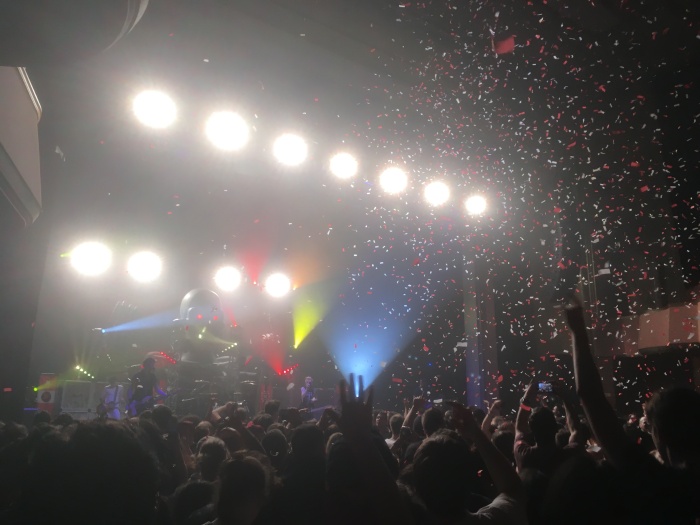 Sum 41 also play Queen‘s “We Will Rock You” cover in a punk-rock key! Half through the song they make the audience sit down and than jump up all together. It’s then time for two old favourites: “Still Waiting” and “In Too Deep”! A burst of energy and two songs which get the mosh pit on and the audience crazily jumping up and down.

For the encore singer Deryck Whibley sits down and plays the piano, he plays a bit of “Crash” and then the touching “Pieces” creating a cozy atmosphere, as hands wave in the air.

The gig ends in smoke and confettis with the punk-rock anthem “Fat Lip” which features a rapping by the band at the beginning. The band leaves the stage and most of the fans leave the venue thinking that the gig is over. Some stay and keep on waiting and they are rewarded because Sum 41 comes out to play one last song, the guys are all disguised in hard-rockers, with long-hair wigs and such. They play “Pain For Pleasure”, which is also the name of their alter-ego heavy metal band.

A fun ending for a concert that surely brought back many people to their teenage years, since Sum 41 have been around for 20 (!) years! The band totally nailed it playing for nearly 2 hours, a pity for the sound though, which unfortunately was not great throughout the entire gig.