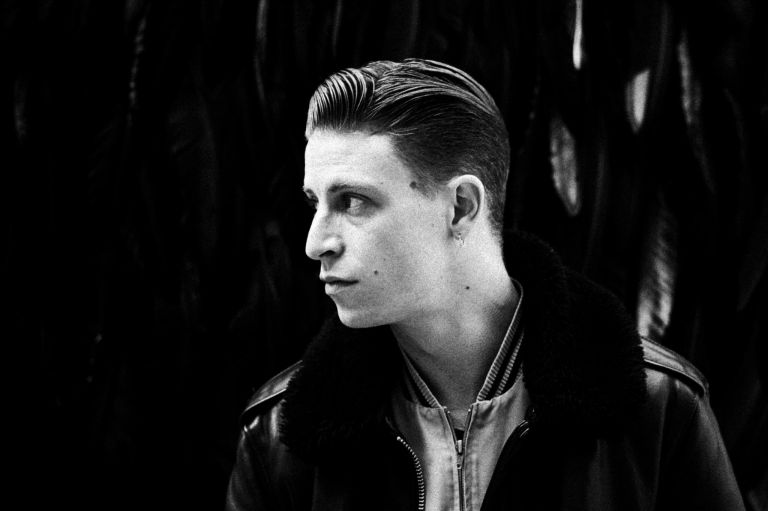 Régis sings in French and his music sounds like poetry, he is accompanied by Robin Girod on bass and Nelson Schaer on drums, both members of Duck Duck Grey Duck, and two other members playing respectively guitar and keyboards. Régis and his band play three songs for an intimate audience. Great vibes and a guitar based music going to the roots of blues-rock.

Mexican band Kumbia Boruka takes the public directly into the engaging and festive world of cumbia, a traditional music originally from Colombia. Even though the band is Mexican the members come from all over South America, from Chile to Colombia. There are a lot of instrument in their music, from accordeon to trombone, to create a groovy rhythm that can’t make you stop dancing, shaking hips and moving feets to keep the beat.

Both Broken Back‘s style of music and the peculiar voice recall German band Milky Chance. He is accompanied on stage by a drummer and a girl on guitar, keyboards. His music has a happy turn to it, it was born as a therapy while he was recovering from a back pain, hence the name “Broken Back”. Hopeful and colourful electronic sounds are lead by his husky voice. A very talented artist!

A rather short set for rocker Alan Corbel but very intense. Powerful and sombre guitar riffs take the lead as the drums in the background dictate the rhythm. Hard bass lines and a mysterious voice which takes you into a mystic trip. At times deep and at other times high pitched, Alan Corbel‘s voice opens the path to the seminagli dark world in his music. For “The Rain”, moments of great intensity where the instruments employ all their power are interposed with quiet moments, just like the calm after the storm.

Mat Bastard is the name of the charismatic singer of Skip The Use. He is accompanied on stage by three young musicians, he has an incredible energy and his texts are very political. Skip The Use played Paléo in 2014 and that gig still remains one of the best I’ve seen at the festival for its energy and music. Mat Bastard on his own is not too far off, his punk-rock reminds bands such as Blink 182, The Offsprings, and such. On stage he is a bomb of energy as usual, running back and forth and jumping up and down.

Mat Bastard plays a punk-rock cover of Louise Attaque’s “J’t’ammène au vent” joined by the audience singing along and jumping. He also makes the audience sing vocals like “ooooh” throughout the gig. Towards the end they play a Skip The Use song! A great ending!

The 42nd edition of Paléo Festival ends here for me. The press release confirms that 230’000 people attended the festival and that the result is very positive. Thanks to Paléo, the organizers, partners, volunteers and all those who made this magic festival possible once again.