We predicted it was going to be loud, fun and hectic… and so it was! From beginning to end the guitar riffs and drum beats took the lead.

Lead by charismatic singer Ophelia, Bloxx capture the attention of the audience straight away with their melodic riffs and powerful drums beats. Their songs’ lyrics are down to earth and you can easily relate to them. They present their new song “Headspace”, a great tune with energetic lyrics and riffs, which is going to be released in March 2019.

For the last song the guitarist let’s himself go on a solo with the guitar up behind his head! A band you definitely have to check out and keep an eye on!

As soon as Circa Waves start playing you start to draw comparison, trying to figure out where you have already heard that sound. Soon enough you realise that it’s their personal touch that makes the music so catchy and attractive. Circa Waves have something that intrinsically draws the audience towards them. And the bass line they have surely plays a role in that! Their third studio album What’s It Like Over There? it’s due to be released on April 5th, 2019.

The four young Liverpool lads bring some great fresh rock, which spans from indie-rock rhythms to melodic and harder ones. A combination that makes you fall in love with them!

The Wombats never seem to get old, their music is as fresh as ten years ago and it’s as if they made time stand still. The Liverpool trio composed by singer Matthew Murphy, bassist Tord Øverland Knudsen and drummer Dan Haggis is excited, as Les Docks is the last night of their “Beautiful People Will Ruin Your Life” tour, which lasted over a year, so they are up for some shenanigans on stage. In the back of the stage, a big black flag with “The Wombats” written on it and their logo, a cute wombat looks at the audience.

The Wombats open the dances with “Cheetah Tongue” a song taken from their last album Beautiful People Will Ruin Your Life. Patterned by beats and synths sounds it welcomes you into their colourful music characterised by plain irony! Singer Matthew Murphy’s voice is great live and it’s tone captures the attention of the audience.

Back to the early days of their album A guide do to Love, Loss and Desperation (2009) with the lively “Moving to New York”, where the guitars and drums are more present than the synths, and the fast pace reminds angry adolescence.

Drummer Dan Haggis speaks French to the audience throughout the concert, which obviously makes the audience very happy, whereas the singer admits he only knows a few words.

Singer Matthew Murphy announces that the next few songs have a lot of fruits in them, he is talking about “Lemon to a Knife Fight” and “Pink Lemonade”.
A person dressed as a wombat brings Jägermeister shots to the band on stage.

“Kill the Director” makes us jump back once more to the old days, with its high speed and powerful riffs and drum beats. The band makes the audience sing to the refrain and clap hands, unifying older fans as well as newer ones.
The sound technician is hidden behind his instruments and the singer declares that he is up to something. A few minutes later, the technician comes out dressed like a woman while The Wombats are playing a song. The singer is obviously amused and so is the audience. It all gets even funnier when the dressed up technician hugs the singer from the back. Pure shenanigans as it’s the last date of the tour.

During “Techno Fan” the fans become dancers in a club, and the phrase “Lazers fill my mind with empty plans” suddenly stands out as is it is reproduced live.

For “Tokyo” an inflatable pink ball is released from stage over the fans who play with it, waving their hands in the air in order to catch it.

And here it comes, The Wombats’ infamous “Let’s dance to Joy Division”, a song that wrote the rule for the irony they never lost. Suddenly the stage is invaded by seven persons wearing wombats costumes who roam around the stage hugging the band members and such. At the end of the song they all leave.

For the encore, singer Matthew Murphy comes out on his own embracing his acoustic guitar and plays a beautiful acoustic version of “Lethal Combination” with its colourful rhythm and the repetition of the vocals “oooh”. He shows his ability for falsettos in the refrain.
It’s then time for “Turn” another single taken from their last album, in which during the intro the guitar riffs are replaced by synths and the pace is rather slow and measured by the drums. A catchy song which sticks in the end and asks to be singed along and danced on to.

They end the night with “Greek Tragedy”, a end part of their irony? Maybe. In any case it’s been great fun and we wish it could start over again. Definitely a cool end for a tour! 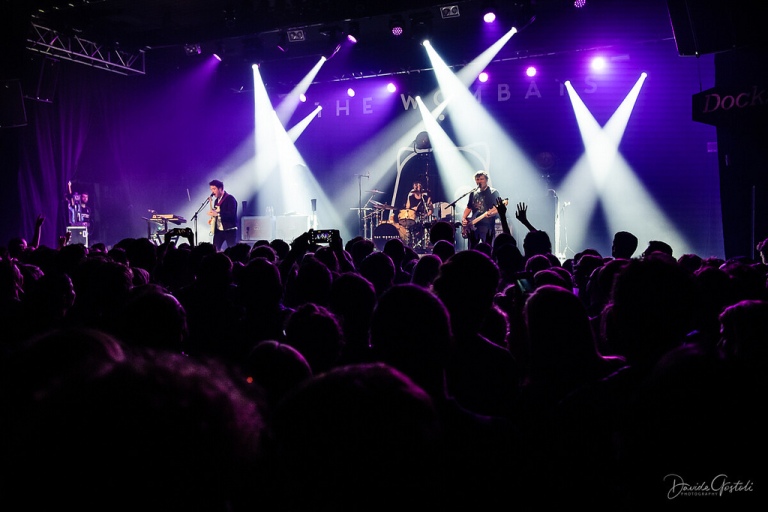